TUC commits to ‘step up the campaign for a free Palestine’: PSC response 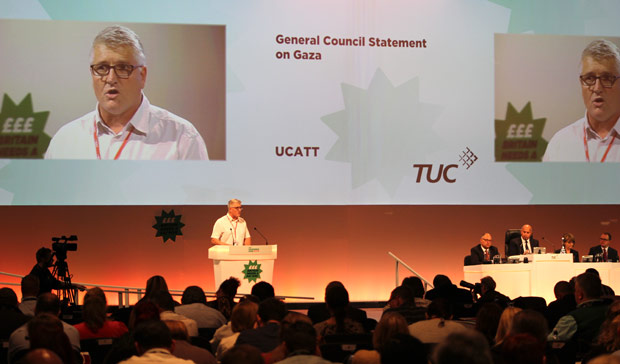 The TUC’s commitment to ‘step up the campaign for a free Palestine’, endorsed today at TUC conference, has been welcome by Palestine Solidarity Campaign (PSC).

In a statement from its General Council, the TUC condemns the ‘collective punishment of the people of Gaza’, and describes Israel’s latest land grab in the West Bank as ‘a shocking provocation’.

The strongly worded statement, which was passed almost unanimously today, says the response of the UK government, the EU and the UN to Israel’s 2014 attack on Gaza has been ‘unacceptable’.

The TUC has now joined PSC, Amnesty International and other organisations in demanding an immediate end to the UK and EU’s arms trade with Israel.

The statement adds: ‘The TUC should, working with the relevant unions, press those companies involved in supporting Israel’s military to cease to do so.’

It also reiterates a previous TUC call for the suspension of the EU-Israel Association Agreement ‘until the rights of the Palestinians are established’. This echoes the demand made by PSC.

The statement commits the TUC to ‘raise the pressure on corporations complicit in arms trading, the settlements, occupation and the wall’. 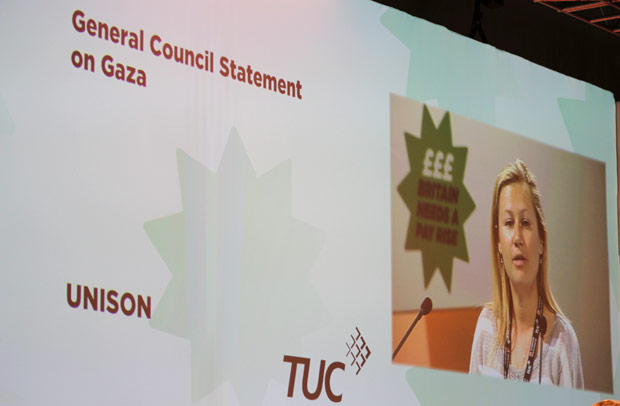 Sarah Colborne, Director of PSC, said: ‘This landmark statement puts the TUC, and the 54 unions it represents, combining a total of nearly six million workers in the UK, firmly behind the Palestinian struggle.

‘Its significance cannot be underestimated. Thanks to this statement, it is now official TUC policy to campaign for an arms embargo on Israel, a suspension of the EU-Israel Association Agreement and to push forward the campaign to stop companies profiting from Israel’s crimes.’

‘This is a huge boost to the solidarity movement, and is strongly welcomed by PSC, which continues to work with the UK’s unions in the struggle for justice for Palestinians.’

Speakers from the major unions were lining up during today’s debate to endorse the General Council’s statement on Gaza.

Following the debate, Billy Hayes, CWU General Secretary, said: ‘TUC General Council Statement is a recognition of the central importance of the struggle of the Palestinian people for Justice.  The CWU greatly welcomes this statement and believes it will contribute to strengthen the international campaign of solidarity with the Palestinian People.’

Christine Blower, General Secretary of the NUT, said: ‘NUT is very pleased to support the General Council statement on Gaza.  We were absolutely prepared to put in an emergency motion, but the fact that there is a General Council statement, demonstrates that the move towards the Palestine cause has been not just in the TUC, but in the British public as a whole.  The job now is to make sure that everybody begins to take the action urgently needed to ensure that there is a free Palestine and that Israel desists from all military activity.’

Len McCluskey, General Secretary of Unite, said: ‘I welcome the General Council statement on Gaza as an expression of the widest support from the British labour movement with the Palestinian people. There is much to be done in building practical solidarity not least in mobilising our workplace representatives to take action against companies which have profited from the war in Gaza, the occupation of the West Bank and the construction of the ‘separation’ wall.’

The full General Council statement can be read here.

(Featured image: Jess Hurd www.jesshurd.com. Other photos thanks to TSSA) 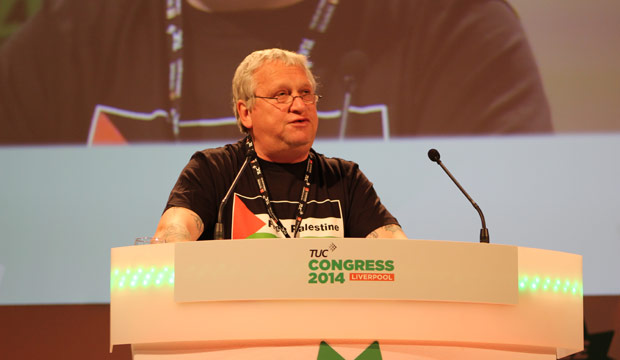