“It is very sad to hear the news of the death of PSC Patron – Rodney Bickerstaffe. Famous as a trade union leader and campaigner for the low paid, he was also a great internationalist and supporter of Palestine. He was an active Patron, coming to meetings, going on demos – not seeking the limelight, happy to show his commitment and support in practical ways. A supporter of Palestine in the trade union movement when it was less common – he was a trailblazer of the cause. A great speaker, who could have doubled as a stand-up comic, he will be much missed. Palestine has lost a great friend and ally – as have we all. Our thoughts are with Pat and his family.” 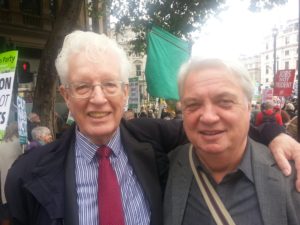