Time to blow the whistle on Israeli football! ⚽

Israel’s occupation and apartheid system intrudes on all areas of life for Palestinians. Nothing is sacred – not even the beautiful game. Today, there are seven illegal settlement football clubs that participate in the FIFA sanctioned national Israeli football league. Not only are they illegal under international law, they violate FIFA’s own rules – as the Israeli national football team holds  matches in occupied Palestinian Territory, against the wishes of the Palestinian federation.

Please join us and write to FIFA’s Council members to insist that Israel’s national football league revoke the affiliation of seven clubs based in illegal settlements on occupied Palestinian territory, or face suspension from FIFA! 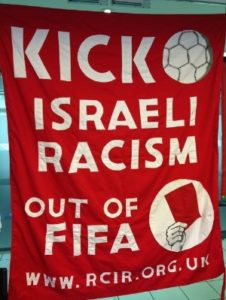 Countless sports associations, trade unions, human rights organizations and faith based groups, as well as the PSC, representing millions of people from 28 countries across the globe, have called on FIFA to play by the rules and respect Palestinian human rights. Even now, FIFA is kicking the ball down the road by not tackling the Palestine issue at the next big FIFA Congress on 10th May.

We can’t let FIFA get away with this. Will you show the red card to the Israeli occupation and write to FIFA?

For more information on how you can become engaged in the campaign and show solidarity in the field of football, visit Football Against Apartheid and Red Card Israeli Racism .

A coalition of students and staff at SOAS are marking Israeli Ambassador to the UK Mark Regev’s visit by uniting & rallying for #apartheidoffcampus. They invite friends of Palestine who believe in universal human rights for an evening of solidarity and celebration with music, speeches and a rally on Thursday April 27th starting from 5:30pm. You can find out more details about the rally here.

Over 1,500 Palestinians imprisoned by Israel have been participating in the hunger strike led by senior Fatah official Marwan Barghouthi since April 17 to protest the torture, ill treatment, and medical neglect of prisoners at the hands of Israeli authorities, as well as Israel’s widespread use of administrative detention — internment without trial or charges. You can read Marwan Barghouthi’s powerful address to fellow parliamentarians around the world on the “Freedom & Dignity” hunger strike here.

How you can show solidarity with the prisoners –