We are calling on the Government to ban trade with Israel’s illegal settlements. Words of condemnation are not sufficient to prevent the colonisation of Palestine. Now is the time for action!

For the last 50 years Israel has been expanding settlements in the West Bank and East Jerusalem, displacing entire Palestinian communities in the process. Over 50,000 Palestinian homes have been destroyed to make way for some 600,000 settlers.

Every settlement is a war crime. The UK have condemned them as illegal and counter-productive to peace efforts, but this has done nothing to stop their rapid growth. Statements need to be backed up with real action.

Ireland set a precedent last month when its Senate voted in favour of a bill banning the importation of products coming from settlements. We need to capitalise on this momentum, and campaign for the UK to follow suit. Please write to the Government to demand we end our complicity in sustaining settlements through our trade. 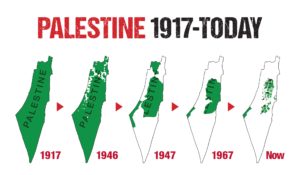