On Tuesday 9th August 2016 the Israeli army demolished five homes of the Al Hathaleen family in Umm Al Khair, continuing the cycle of demolition-rebuild-demolition over eight recent years.  Three of the demolished structures were funded by the European Union.

FIFA has recently produced a video featuring Umm Al Khair, entitled “Football Unifies, Inspires In Palestine”, a village which has been attacked by Israeli forces. Please take action to ask FIFA to suspend Israel from international football competitions for destroying communities in Palestine.

For more details to include in your email, please see the press release below, from Red Card Israeli Racism (RCIR).

FIFA’s impressive 9 July 2016 video entitled “Football Unifies, Inspires In Palestine” reports opinions that football supports Palestinian identity and brings the nation together.  Besides showing the national stadium and emphasising the progress made in women’s football it reveals an example of the extreme difficulties that village communities face in providing adequate football facilities for their youngsters.  The observation that every ball that goes over the separating fences “does not come back” is a mild indicator of the effects of the Occupation of the West Bank by Israeli military forces.

Umm Al Khair and Susiya, in the South Hebron Hills are the two impoverished villages in the film.  What is not shown is the current terrible suffering of families in those villages.

On Tuesday 9th August 2016 the Israeli army demolished five homes of the Al Hathaleen family in Umm Al Khair, continuing the cycle of demolition-rebuild-demolition over eight recent years.  Three of the demolished structures were funded by the European Union.

Susiya could soon see nearly half its houses demolished in the same way.  Villagers have petitioned the Israeli authorities without success. Settlers have been documented harassing Palestinian residents, cutting down and stealing their crops and damaging property

These and other villages in the area have suffered repeated house demolitions, frequent violence from Israeli settlers, and are denied basic services like water and electricity. There seems little doubt that Israel would like to ethnically cleanse the South Hebron Hills – and other parts of Palestine – in order to make way for more settlers.  Israel exploits the structure of planning laws from the 1940s to argue that the villages do not have permits to build since they do not have an accepted Plan.

FIFA is rightly proud of the work it does to support football development in Palestine.  We call on FIFA to condemn the demolitions in Umm Al Khair, and to defend the right of Palestinians throughout the Occupied Territories to live lives free of criminal terror and deprivation.

We further call on FIFA to insist that the Israel Football Association bans illegal settler teams from its leagues and competitions, or face  suspension from FIFA membership.

FIFA has enshrined the promotion of human rights at the heart of its Statutes. Will it now promote Palestinian human rights? 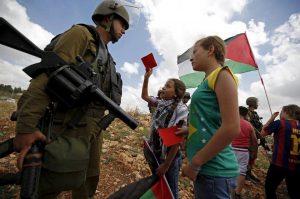 Football protest in Wales: The Israeli women football team are playing Wales in Newport on Thursday the 15th September. Cardiff PSC is organising a  protest against Israel’s human rights violations: