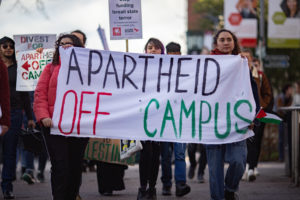 Use these sample tweets to support students taking action today on the 16th anniversary of the BDS Call, Friday 9th July as part of the student day of action for Palestine. Tweet between 12-2pm to join the #DivestForPalestine #SupportBDS twitter storm!

All UK universities must commit to divest from companies complicit in Israel’s grave violations of Palestinian human rights. I stand with students fighting to get #ApartheidOffCampus. Unis must #DivestforPalestine! pic.twitter.com/KQIdT6so0C

Research by @pscupdates has found that UK Unis invest £400m in companies complicit in Israel’s oppression of Palestinians. This includes companies that supply the Israeli military with weapons used in Gaza. UK universities must #DivestForPalestine now! #SupportBDS

On the 16th anniversary of the Palestinian call for BDS, I call for universities to divest from all companies complicit in Israeli apartheid, including companies supplying weapons used against the civilian population in Gaza. #SupportBDS #DivestForPalestine

My university (university name) must commit to divest from, and sever all institutional links with, companies complicit in Israel’s violations of international law. Students stand in solidarity with the Palestinian people! #DivestForPalestine #SupportBDS