More than 30 campaigners used the large space outside the conference hall to mingle with conference delegates, hand them material about HPE’s role in Israel/Palestine and engage with them.  Campaigners managed to reach a large proportion of conference attendees: in the space of about three hours, 500 ‘fake id cards’ were handed out and in addition over 1,000 Hewlett Packard Harms Palestinians postcards! The ‘fake’ ID cards were a definite hit as delegates took and read them- probably thinking they were a special conference pass.

Campaigners reported on conversations with scores of conference attendees – including for example HPE executives from the USA and UK, HPE distributors in the Middle East, Russian and Scandinavian HPE employees. The issue of corporate ethics and responsibilities was reported as a frequent conversation theme; and campaigners said they emphasized to delegates that HPE is under obligation to correct the situation when it knows its customers are using HPE technology in human rights abuses.  What was particularly pleasing was that a number of corporate customers of HPE indicated they would raise the issues, which campaigners had highlighted, with their HPE account managers.

The Nov 29 action at The HPE Trade Fair was one of over 150 actions which are taking place in 25 countries across 6 continents as part of the international boycott Hewlett Packard Campaign. The week of action – including over 30 by Palestine Solidarity Campaign branches in the UK alone – is the largest coordinated set of actions against a Boycott Divestment & Sanctions target there has been. 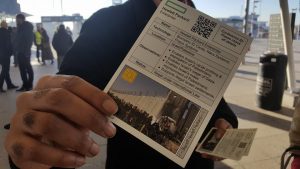 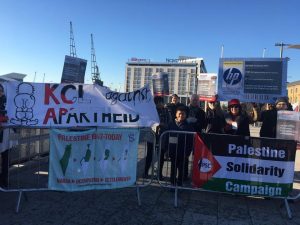 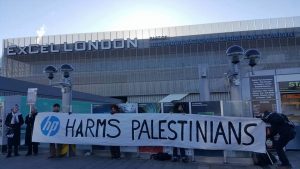 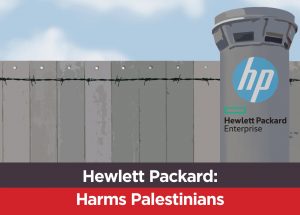