Refugees and right to return factsheet

The Palestinian refugees are the indigenous Arab inhabitants of historic Palestine (what is now Israel, the occupied west Bank and the Gaza strip), who were displaced or expelled from their original  homes, and their descendants. they have never been allowed to return to their homes and now comprise one of the world’s largest refugee populations. they are the longest suffering too — 2008 marked the 60th anniversary of their initial dispossession.

The Right of Return in International Law

In addition to its clear moral basis, the right of return of Palestinian refugees has a solid foundation in international law and is enshrined in a number of UN resolutions:

The right of return is an inalienable and basic human right and as such it cannot be negotiated away. Israel’s denial of this right is illegal under international law. 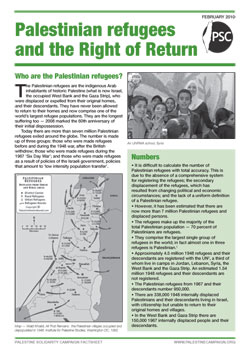 Read more in the refugee factsheet