For centuries Palestine was part of the Ottoman Empire, which comprised most of the Middle East and North Africa. Its rural population lived in hundreds of small towns and villages, producing olive oil, fruit, cereals, cotton, wool, leather and soap, while cities like Jerusalem, Nablus, Hebron and Haifa were hubs of trade and the centres of the social and intellectual fabric of Palestinian life. Palestinians were guardians of many of the holy places in Jerusalem and Bethlehem.

Read more in our Britain’s Legacy in Palestine factsheet

Although the Palestinians had demanded their independence from the Ottoman Empire throughout the nineteenth century, their calls became stronger and more organised from the very beginning of the twentieth century. In 1908 Palestinian newspapers voiced their call for recognition of their rights and opposition to Zionist colonisation of Palestine.

Whilst Jews in Europe, especially in Poland and Russia, faced widespread pogroms, the Middle East had long been a place where they had lived side by side with other ethnic
and religious groups. In Palestine, by the onset of the First World War, Muslims formed about 84%, Christians about 11% and Jews less than 6% of the population. 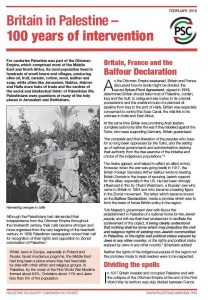 As the Ottoman Empire weakened, Britain and France discussed how its lands might be divided: the secret Sykes-Picot Agreement, signed in 1916, determined Britain should take most of Palestine, Jordan, Iraq and the Gulf, to safeguard sea routes to its colonial possessions and the overland route of a planned oil pipeline from Iraq to the port of Haifa. Britain was especially concerned to control the Suez Canal, the vital link to its colonies in India and East Africa.

At the same time Britain was promising Arab leaders complete autonomy after the war if they rebelled against the Turks, who were supporting Germany. Britain guaranteed:

“the complete and final liberation of the peoples who have for so long been oppressed by the Turks, and the setting up of national governments and administrations deriving their authority from the free exercise of the initiative and choice of the indigenous populations.”2

The Arabs agreed, and helped to effect an allied victory. However, when the war was going badly in 1917, the British Foreign Secretary Arthur Balfour wrote to leading British Zionists in the hopes of securing Jewish support for the allies, especially in the US. He had been strongly influenced in this by Chaim Weizmann, a Russian Jew who came to Britain in 1904 and who became a leading figure in the Zionist movement. The letter, which became known as the Balfour Declaration, made a promise which was to form the basis of future British policy in the region:

“His Majesty’s government view with favour the establishment in Palestine of a national home for the Jewish people, and will use their best endeavours to facilitate the achievement of this object, it being clearly understood that nothing shall be done which may prejudice the civil and religious rights of existing non-Jewish communities in Palestine, or the rights and political status enjoyed by Jews in any other country.”

Neither the rights of the indigenous people of the region nor the promises made to Arab leaders were to be respected.

Read more in our factsheet>