Today the military installations, the expanding illegal settlements and the harsh restrictions on access and movement all threaten the survival of any Palestinian presence in the Valley.

It used to be home to about 250,000 Palestinians, mostly farmers and pastoralists; now they are reduced to less than 60,000, controlled and harassed by the 9,500 Israeli settlers living in 37 settlements and by the Israeli army.

The Valley constitutes one third of the territory of the West Bank but Palestinians are excluded from 94% of it. They are now concentrated in Jericho, 24 villages and dozens of small Bedouin communities. The UN Office for the coordination of humanitarian affairs (Ocha) stated in 2012:

“The demolition of civilian Palestinian homes, as well as the transfer of Israeli settlers into the occupied territory, are strictly prohibited and must be brought to a halt.” 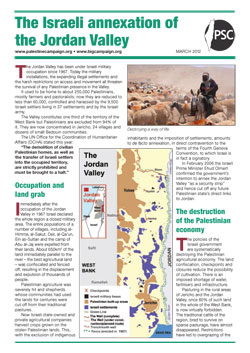