PSC have produced a Jerusalem factsheet which provides information about the history of Jerusalem, Israel’s illegal settlement activity, the eviction of Palestinians and demolition of their homes and Israel’s discriminatory laws.

“Israel’s main motivation is almost certainly demographic – to reduce the Palestinian population of Jerusalem, while is exerting efforts to boost the number of  Jewish Israelis living in the city – East and West.”

Israel’s master plan for Jerusalem produced in 2010. The Israeli authorities have openly admitted they do not want the Palestinian population to rise above 30% of Jerusalem’s population.

UN OCHA have produced a new humanitarian update on East Jerusalem. You can read it here>.

The UN report that: 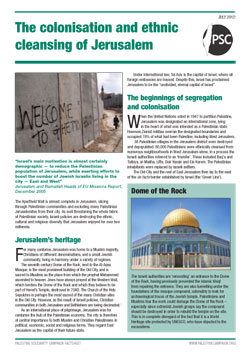 Read more in our Jerusalem factsheet