It is often claimed that Israel made ‘the desert bloom’ – sometimes as justification for the colonisation of Palestine – but the reality is very different. Israel’s policies of colonisation, expansionism, industrialisation and urbanisation have had a profound impact on the environment.

Palestinians’ environment suffers from not only the discriminatory policies of the state of Israel, but often from their victimization too – for example the destruction of olive groves either for settlements or as acts of terrorism by Israel settlers. 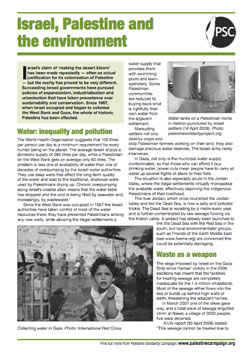 You can read more about Israel, Palestine & the environment in our environment factsheet.