For decades Israel has been destroying Palestinian  lives, homes and livelihoods. it continues to build illegal settlements in the west Bank, stealing land and water resources and setting up hundreds of checkpoints to stop Palestinians getting to work, school or hospital. The Jordan Valley has, in effect, been annexed to Israel.

Israel has almost completed an eight-metre high apartheid wall which snakes through the west Bank,  isolating many Palestinian centres of population,
including Bethlehem.

In east Jerusalem Israel is carrying out a policy of  ethnic cleansing; Palestinians whose families have lived there for centuries are being evicted from their homes,  which are then destroyed or occupied by settlers.

Since 2006 the Gaza strip has been under siege; even basic necessities are denied entry. in the winter of 2008–2009, over 1400 Palestinians including more  than 300 children were killed in three weeks of bombing and shelling by land, sea and air, condemned by the UN Goldstone report as war crimes.

In Israel itself the indigenous Palestinians are treated as second class citizens, and no refugees have been allowed to return to their homes. 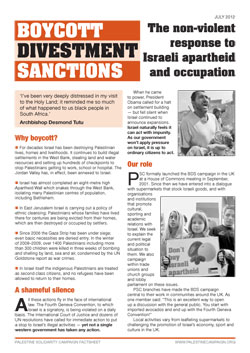 Read more in our boycott fact-sheet 2014