“I am a black South African, and if I were to change the names, a description of what is happening in the Gaza Strip and the West Bank could describe events in South Africa under Apartheid.” Archbishop Desmond Tutu

The UN International Convention on the Suppression and Punishment of the Crime of Apartheid (1973) defines apartheid as ‘inhuman acts committed for the purpose of establishing and maintaining domination by one racial group of persons over another racial group  of persons and systematically oppressing them.’ Find out more in  The New Apartheid factsheet

According to Article 2 of the Convention, these ‘inhuman acts’ include:

The Israeli government has been guilty of all these ‘inhuman acts’, in relation to the Palestinian people.

The Convention declares that apartheid is a crime against humanity and provides a definition of that crime in Article 2. It consequently imposes obligations on States parties to to adopt legislative measures to suppress, discourage and punish the crime of aparthei and makes the offence an international crime which is subject to universal jurisdiction.

The Rome Statute of the International Criminal Court asserts juridiction over apartheid as a crime against humanity. 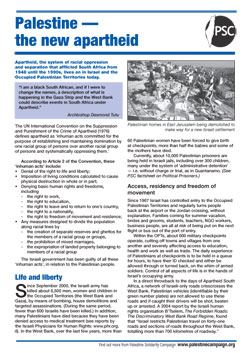 Find out more in The New Apartheid factsheet