Palestine was once again one of the key issues supported by the UK trade union movement at the TUC Congress in Brighton in September 2015.

Hundreds of delegates have shown their support, by visiting the Palestine Solidarity Campaign stall in the exhibition area, by wearing a Palestine lanyard, signing the petition against the siege of Gaza and attending our fringe meeting inside the conference centre.

The conference also saw the launch of the report of the latest trade union delegation to Palestine in July, with representatives of ALEF, TSSA and RMT. The report – available on the PSC website – was written by Tim Lezard (NUJ) and features an account and impressions by the delegates during their visit of the Palestine occupied territories and Israel.

The meeting, supported by ASLEF, BFAWU, FBU, GMB, NUT, PCS, RMT, Thompsons Solicitors, TSSA, UCATT, UCU, UNISON and UNITE the Union, was concluded by Hugh Lanning, PSC Chair, who urged the unions to take further action in support of Palestinian human rights and to continue to support the campaign for justice for Palestine in the UK. 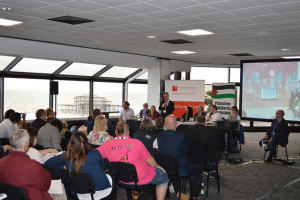