The event was supported by a range of national UK trade unions – ASLEF, AUE, BFAWU, CWU, FBU, NEU, PCS, RMT, Thompsons Solicitors, TSSA, UCU, UNISON and Unite the Union, who were all represented on the day. Other unions, some of which from Europe (Belgium, France, Netherlands, Spain etc.) we also represented.

The day was opened by Prof Kamel Hawwash, Chair of PSC, who welcomed guests and provided information on the current situation in Palestine, following which he chaired the first panel session of the day: Palestinian Worker’s Rights under Apartheid.  Samia Al-Botmeh, Assistant professor in economics and researcher at the Centre for Development Studies at Birzeit University in Palestine, was the first speaker and gave a presentation on the overall general economic situation of the occupied territory under Israeli apartheid and military occupation. Samia demonstrated how Israel’s policies are undermining the Palestinian economy, creating huge levels of unemployment, underdevelopment and eventually disabling the Palestinian economic structures, which makes the economy and the workforce dependant on Israel.

This was followed by a Riya Al’Sanah, a Palestinian PhD candidate at the University of Exeter, presented the new report Working Palestine: Covid-19, Labour, and Trade Unions in the West Bank and Gaza Strip which she co-authored with Dr. Rafeef Ziadah and Professor Adam Hanieh. Riyah presented the report, which demonstrate the extreme hardship Palestinians face in their everyday lives, in key areas such as health, agriculture, education and construction. The Israeli system of apartheid and oppression has left the economy in tatters and is forcing tens of thousands of Palestinians to work in Israel, or in the illegal Israeli settlements. In both cases they face huge barriers and daily oppression and degrading pay and working conditions. This system also heavily prevents Palestinians from organising into trade unions in their workplaces. The report also looks at the devastating impact of the Covid crisis on an already weakened workforce. Riyah finished by a calling for solidarity with Palestinian workers organising in the harshest of circumstances.

The morning was concluded with a series of seminars covering a range of discussions and activities.

The first one – Protecting the space to campaign for Palestinian rights – was focused on the attacks on the solidarity movement and how we are organising and fighting back to enable our members and supporters to continue to campaign for the rights of the Palestinian people. One area was the UK government announcement that they will introduce primary legislation to stop the divestment campaigns at local government levels. PSC and many of its national trade union partners are part of a wide civil society coalition, who is strategizing to resist this attempt to end our right to campaign for human, civil and environmental rights. You can find more information here: https://righttoboycott.org.uk/

Seminar 2 – Boycott, Divestment, Sanctions: Take BDS action now – discussed the BDS movement and key campaings in the UK. This included the work by trade unions and PSC activists aiming to get local government pension funds to divest from companies complicit in Israel’s occupation and apartheid system. More information can be found here https://lgpsdivest.org. Also discussed was the Barclays: Don’t Bank on Apartheid campaign, which is gathering momentum, and which proved to be of great interest to the trade union participants. Future actions were discussed about the ways to stop Barclays from providing investment and financial services to arms companies, thus facilitating the provision of weapons and technology for Israel’s militarised repression of Palestinians.

Another popular seminar was looking at Understanding Israeli Apartheid: Making the case for Palestinian Rights. Led by Ben Jamal, PSC Director, alongside Rachel O’Brien from Amnesty International, the session looked at the way the analysis that Israel is committing the crime of apartheid – as defined in international law – is now widely accepted in civil society, after the recent reports that have confirmed this, and that it is key way to understand the situation. The discussion was centred around the ways this understanding can empower activists to challenge the portrayal if Israel as a democratic state, as it is no longer possible to ignore the forensic evidence of their institutional discrimination.

Finally seminar number 4 – Organising for Palestine in your Trade Union - was a great space for trade union activists to share and exchange best practice and useful ways to build activities in their unions in solidarity with Palestine. Some of the areas covered include the multitude of ways trade unionists can highlight Palestine in their unions and workplaces, for example by inviting speakers, passing motions, affiliating and donating to PSC, supporting BDS campaings (PUMA, Barclays), publicising and attending national and local protests for Palestine, linking up with sister unions in Palestine and when possible, offer direct and practical solidarity, and much more.

The early afternoon panel, following a delicious Palestinian lunch, heard from senior trade union speakers, talking about their unions work in solidarity with Palestine. The speakers – Kevin Courtney, Joint General Secretary NEU, Jo Grady, General Secretary UCU, Amerit Rait, Vice-President UNISON, Koen Vanbrabandt, Chair of the European Trade Union Network for Justice in Palestine (ETUN) and Simon Dubbins, Director of International, Unite the Union – all re-stated the support of their respective unions for Palestinian human rights and talked about the importance and necessity for their ongoing commitment to freedom, justice and equality for the Palestinians. This included calls for ongoing resistance to the attacks on our movement and the need to resist the UK Government’s attempts to take away our right to boycott, while inking up with European and global unions to strengthen the movement.

After a repeat of the seminars, the final panel concluded the day and presented thoughts on the next steps of the solidarity movement with Palestine. The speakers – Mariela Kohon, Senior International Officer TUC, Sarona Bedwan, Outreach and Programme Manager MAKAN and Ben Jamal, Director Palestine Solidarity Campaign  - asserted the fundamental need to keep Palestine on the agenda, not least in the trade union movement, all our struggles are interconnected, and our solidarity matters to oppressed people. The importance of education was highlighted, as event such as this conference provide the tools for moving forward, against the attempts by Israeli apologists to deny Palestinian rights, history and existence.

Ben Jamal, Director of PSC speaking at the end of the conference said:

”We need to be ready to constantly reassert that the solidarity we call for is in the best traditions of this movement – a solidarity that springs from the moral imperative that recognises that an injustice to anyone anywhere is an injustice to everyone everywhere, but also springs from the political understanding that recognises the interconnectedness between all struggles against unjust structures of power, and therefore understands  that international  solidarity is not a distraction or an add-on to the primary purpose of Trade unions in fighting for the economic and social rights of their members. It is fundamental and integral to and inseparable from those primary purposes”.

Louise Regan, Vice Chair PSC & National Officer NEU, closed the event, and thanked the over 100 attendees representing over 15 trade unions, who left the event inspired and ready to step up their and their union’s solidarity work with the Palestinian people. 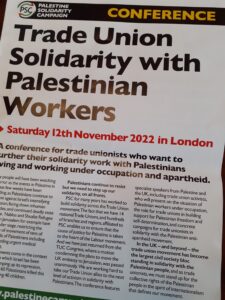 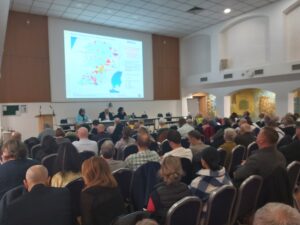 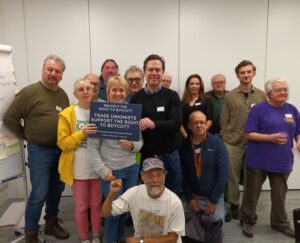 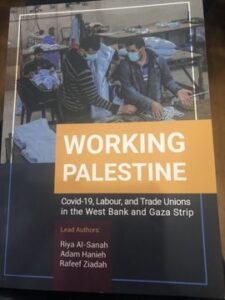 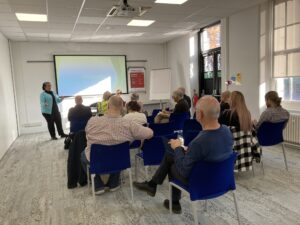