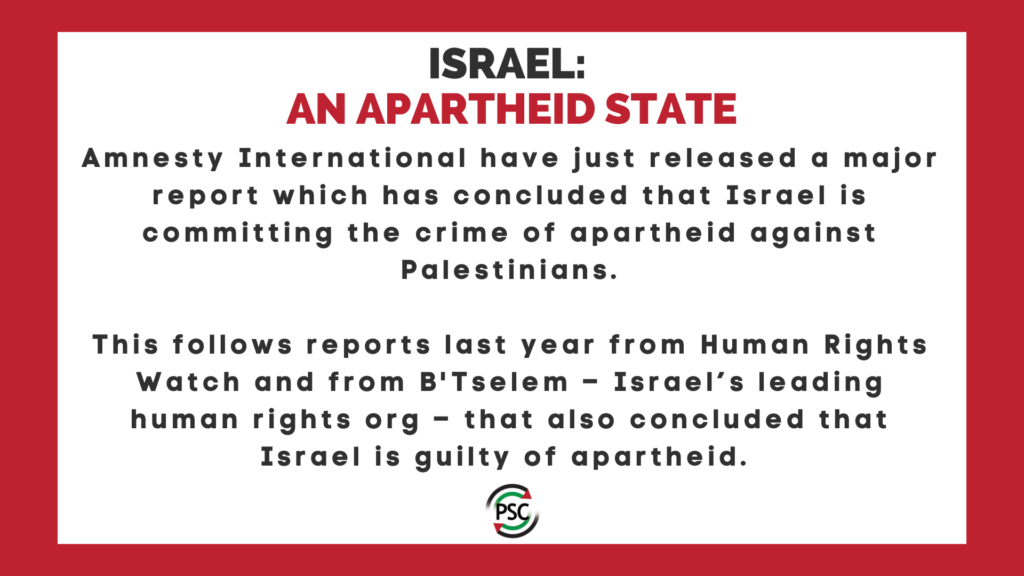 After four years of research, Amnesty International, the world’s leading human rights organisation, has today released a 280 page report detailing “Israel’s apartheid against Palestinians: a cruel system of domination and a crime against humanity” for which ​​”Israeli authorities must be held accountable.”

Palestine Solidarity Campaign Director, Ben Jamal, says: “Amnesty’s report is comprehensive, forensic and devastating in its conclusions. Its release means that the world’s two leading human rights monitoring organisations, and Israel’s own leading human rights organisation have all now affirmed what Palestinian civil society has been asserting for decades. That Israel is guilty of apartheid, a crime against humanity. Those who continue to treat Israel as a normal functioning democracy, and to shield it from accountability for its crimes are complicit in the crime of apartheid and on the wrong side of history. PSC welcomes the recommendations that Amnesty outlines – including targeted sanctions, an arms embargo, an investigation by the International Criminal Court, the exercise of universal jurisdiction, the right of return of refugees and the granting of equal rights to everyone living under Israeli jurisdiction – and calls on the UK government to take immediate action, including ending the two-way arms trade with Israel.”