Palestine Solidarity Campaign (PSC) condemns the arrest of Issa Amro by the Palestinian Preventive Security Force and calls for his immediate and unconditional release. Issa was detained for criticising the Palestinian Authority for its arrest of a journalist in a Facebook post.

“I have met and worked with Issa and have huge regard for his courageous battle against injustice. He has spent his life defending fellow Palestinians against Israel’s increasing colonisation of Palestinian land. The Palestinian Authority should be defending and supporting human rights defenders like Issa, not arresting them for expressing their views online.”

Issa has spent his life battling against injustice. As the founder and coordinator of Youth Against Settlements, he has overseen a peaceful campaign of resistance to Israel’s increasing settlement expansion. In 2010, he was declared “human rights defender of the year in Palestine” by the Office of the United Nations High Commissioner for Human Rights and is recognized as a human rights defender by the European Union. He has been subject to continued harassment from Israeli settlers and arbitrary arrest and detention by the Israeli state. Issa is due to stand trial in November in an Israeli military court on a series of trumped up charges. Amnesty International has condemned Israel for their treatment of Issa and stated that if convicted, Issa will be considered a prisoner of conscience. 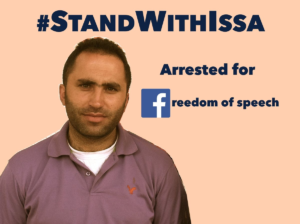