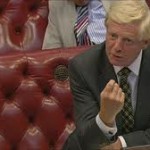 2. Debate in Westminster Hall on FCO’s human rights work in 2011:

– Sir John Stanley: Says FCO is right to include Israel and OPTs as countries of concern. He strongly condemns Hamas over rocket attacks and Israel over “the relentless and continuing violation of basic Palestinian rights”.

– Mike Gapes: Suggests that new Israeli government might be a chance for restarting negotiations.

– John Stanley: Says may be but adds: “I fear that since the assassination of Prime Minister Rabin, there simply has not been a majority in the Knesset that is really willing to embrace the concept of creating a separate, independent, viable Palestinian state.” Gaza has been turned into a prison camp, Palestinian families are removed from Jerusalem, West Bank turning into bantustans. Asks if minister sees prospect of step-change in Israeli policy.

– Jeremy Corbyn: Raises prisoner issues, including detention of Palestinian parliamentarians and hunger strikes. Was in Gaza three weeks ago and witnessed tragedy of  the region’s best-educated young people trapped with with no access to Israel or West Bank, living in a cauldron which will continue to explode unless something is done. If Egypt opens Rafah that would make Gaza part of Egypt rather than of Palestine. “That may well be the intention of some.”

– Martin Horwood: Notes that Foreign Secretary “has been increasingly robust and assertive in his comments on Israel” especially in regard to settlements and EU’s potential to take further steps; condemns Hamas targeting Israeli civilians.

– Hugo Swire (concluding 10 min reply): “I have left a number of issues that I would dearly love to address, not least the situation in Israel and with the Palestinian authority, and the hope we all have in President Obama’s visit there shortly.”

– Mike Freer: What assessment has DfID Secretary made of PA’s financial stability?

– Alan Duncan: PA’s funding gap in 2013 likely to be at least $500 million; Israel must ease restrictions and transfer tax revenues.

– Mike Freer: There is concern that British aid donations to PA are used to pay salaries to convicted terrorists.

– Alan Duncan: IMF report in 2011 estimated that without the restrictions, Palestinian economy would be 78% larger, obviating its dependence on aid.

– John Howell: What steps are HMG taking to ensure that donor money is not used in a way that undermines peace process?

– Alan Duncan: We rigorously monitor this; PA is committed to not inciting violence; it is right that we support it as the potential Government of a Palestinian state.

– Anas Sarwar: A viable solution will come about only if Palestinians are able to run effective country; what is HMG’s assessment of structures available in PA to make that happen?

– Alan Duncan: Structures are sorely stretched; we also urge other donors, the Arab states, to do their share, for if PA collapsed so would prospects of proper peace negotiations.

– Gordon Henderson: What processes are in place to ensure that UK, EU- and UN-funded NGOs in the PA do not promote incitement of hate?

– Alan Duncan: They are subject to rigorous due diligence assessments; we deplore incitement on either side.

– Gordon Henderson: Can we be sure that no British aid is used for projects like the puppet show promoting non-smoking where children were urged to replace cigarettes with machine guns?

– Alan Duncan: This puppet show was performed not by an NGO but a visiting organisation and no UK or UN funds had anything to do with it.

– Richard Burden: Does minister agree that we must also stand with those human rights organisations in Israel and in Palestine that stand out against hate crimes such as price tag attacks?

– Alan Duncan: We must make a stand against incitement of hate from either side.

– Damian Collins: We should also remember that the service and stories of British and Commonwealth armed forces who fought in Gallipoli and Palestine are also an important part of this centenary.

– Hugh Robertson: Agrees that Gallipoli was important for the Australians, “as places such as Palestine are for other countries.”

1. Nicholas Soames: What assessment has DfID Secretary made of the humanitarian situation in the OPTs?

2. Baroness Tonge: What discussions have HMG had with other EU member states concerning consequences of Israel continuing to build settlements?

3. Baroness Tonge: What were the grounds on which Palestinian peace activist Saeed Amireh was refused an entry visa to the UK in February?

1. Baroness Tonge: What representations have HMG made to Israel concerning establishment of an independent inquiry into the death in custody of Arafat Jaradat?

2. Baroness Tonge: What representations have HMG made to Israel concerning detention of Mahmoud Mefleh in Ofer prison since December? [Baroness Warsi: “We have not raised this specific case but continue to press the Israeli authorities to comply with their obligations under international law, including in their policies on the detention and treatment of Palestinian prisoners.”]

3.  Lord Dykes: When will HMG next raise with Israel the matter of Palestinian detainees being held in Israeli prisons, sometimes without due process, for many years?