PSC released a statement after Palestinian prisoners suspended the hunger strike after Israeli authorities yielded to the demand to enter negotiations with the prisoners’  chosen leaders:

On Monday 17 April, over 1,100 Palestinian prisoners held across jails in Israel began a historic hunger strike under the leadership of Marwan Barghouti. Now, their numbers have grown, with over 1,500 prisoners committing to the strike. Family members of the imprisoned are also refusing food in solidarity. Over 1500 Palestinians of all political persuasions are now on hunger strike, asking for their demands and for their human rights to be respected.

Human rights organisations such as Amnesty International have called on Israel to end ‘unlawful and cruel’ policies towards Palestinian prisoners. This includes  the use of torture during interrogation, solitary confinement, numerous cases of gross medical negligence in cases of acute health issues, alongside the routine denial of visits.

The prisoners are calling on Israel to end its violations of human rights conventions in the treatment of Palestinians detained within Israel’s prison system, often without charge. You can read Marwan Barghouti’s thoughts on why ‘Hunger striking is the most peaceful form of resistance available’ in his piece published in the New York Times.

A day of solidarity is taking place on Tuesday 30 May

Ask the Foreign Office to take a stand

Now is the time for people in the UK to stand and show their solidarity with the hunger strikers, demanding nothing less than their human rights, their freedom, and their dignity. Please join us in asking the Foreign Office to urgently raise the issue with Israel, to end its violations of international law and human rights conventions in the treatment of Palestinian prisoners. 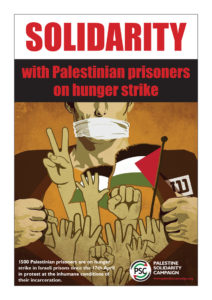 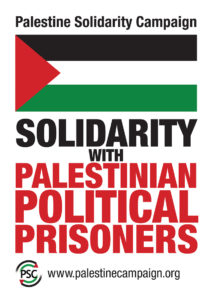