Earlier in the week Ala Khatib, Director of Kav LaOved (Workers Hotline) and official guest of UNISON, addressed the official UNISON International rally and explained how Palestinian workers in the Illegal Israeli settlements in the Jordan Valley are denied their basic labour rights by their Israeli employers.

The main Palestine motion was debated on Thursday morning and was, along with several amendments, overwhelmingly adopted by the conference. The motion reiterates UNISON’s commitment to justice for Palestine and to continue to support the Boycott, Divestment and Sanctions campaigns in conjunction with the Palestine Solidarity Campaign. 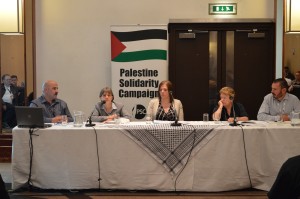