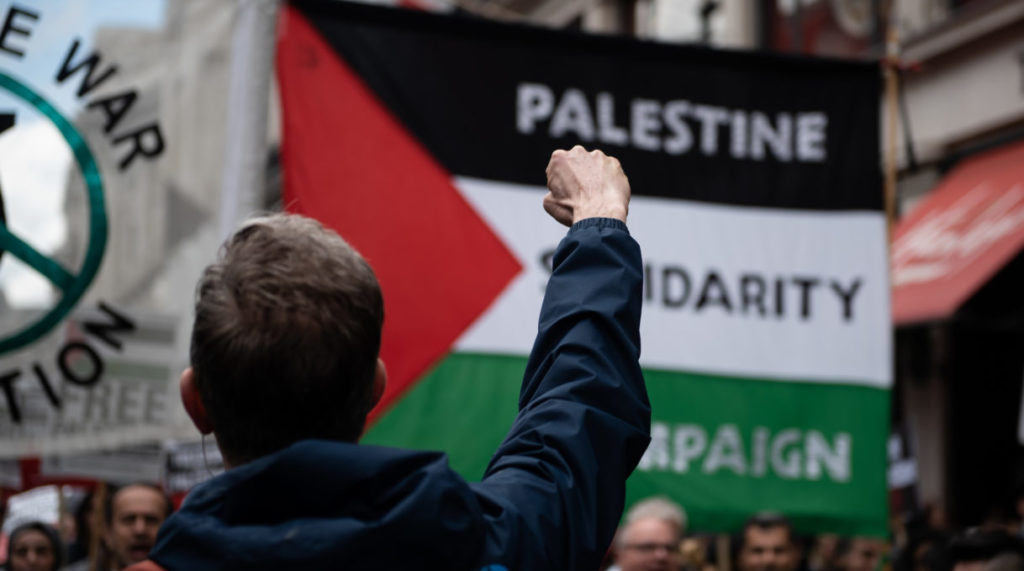 PSC is delighted to announce that we have won a great victory in the battle to defend the right to take action in the UK in support of Palestinian rights.

Since 2017 we have been fighting the UK Government in the courts, protecting the right to undertake BDS campaigns in the UK. We won in the High Court, then lost in the Court of Appeal, but today the final verdict from the Supreme Court is in – and we have won!

With support via submissions from the Quakers, Campaign Against Arms Trade and War on Want and with a huge body of small donations from thousands of members and supports to fund the legal challenge, we have managed to defeat regulations that would have stopped Local Government Pension Schemes from divesting from companies complicit in Israel’s oppression of the Palestinian people, and additionally from divesting from the UK defence industry.

The Supreme Court has ruled in our favour and the regulations the Government introduced in 2016 are now finally and definitively declared illegal and thrown out.

For some years Israel and its allies have been engaged in a battle to delegitimise activism for Palestinian rights and, in particular, to attempt to criminalise action in support of the Palestinian call for Boycott Divestment and Sanctions (BDS).

The UK Government’s attempts to introduce these regulations must be understood within that context. The Government announced in the Queen’s Speech its intention to bring in further anti-BDS legislation. Our victory in the Supreme Court today should act as a shot across their bows.

But we know we will need to do more, and PSC is building a campaign alongside a broad range of allies who are concerned about attempts to bring in laws that seek to prohibit public bodies from making their own decisions about not investing in companies that are complicit in violations of international law – whether in relation to Palestine or elsewhere.

Today is a great victory from which we will draw strength for the battles ahead. Read our full press release below!

In bringing the legal case, PSC – the UK’s largest organisation campaigning for Palestinian human rights – had raised concerns about threats to freedom of expression, government overreach in local democracy, and the right of pension holders to have a say in the investment and divestment of funds.

In 2016 the Department for Communities and Local Government issued guidance which prohibited Local Government Pension Schemes (LGPS) from pursuing divestment from foreign nations and UK defence industries. This included a prohibition against disinvestment in companies on the basis that they trade in products produced in the occupied Palestinian territories, for example, even if this was the will of the LGPS members.

In June 2017, PSC brought a Judicial Review challenge which resulted in the Administrative Court ruling that the decision to prohibit LGPS funds from this kind of disinvestment was unlawful. The Court of Appeal then overturned the Administrative Court’s decision at a hearing in May 2018. In November 2018, PSC was granted permission to appeal this judgement at the Supreme Court. It was announced today that the Supreme Court ruled in favour of PSC.

The ruling comes just months after the UK Government announced its intention to introduce legislation to prohibit public bodies from imposing their own direct or indirect boycott divestment or sanctions (BDS) campaigns against foreign countries – a move that was widely condemned by human rights campaigners as an attack on civil liberties.

PSC has asserted that the UK Government’s defeat in the Supreme Court demonstrates the illegitimacy of its attempts to suppress BDS campaigns.

Kamel Hawwash, Chair of  Palestine Solidarity Campaign, said: “This historic victory represents a major win not just for the campaign for Palestinian rights, but for the fundamental principles of democracy, freedom of expression and justice. The Supreme Court ruling sends a decisive message to the UK Government that they should not be dictating how Local Government Pension Schemes choose to invest their funds, including choosing not to invest in companies complicit in Israel’s human rights abuses. At a time when Israel is continuing to ramp up its oppression of the Palestinian people and its illegal acts, including annexing large swathes of the illegally occupied West Bank, the Government should be acting to uphold international law and defend human rights, not attacking peaceful campaigns which seek to do precisely that. PSC will continue to resist any attempts to suppress BDS activism, and I extend deep thanks to all our members and supporters who have stood by us every step of the way in this legal case. We have shown how powerful this movement is.”

Jamie Potter, Partner in the Public Law and Human Rights team at Bindmans LLP, and solicitor for PSC said: “We welcome the Supreme Court’s confirmation that the Government went too far in imposing its political opinions onto the management of the money of LGPS members. LGPS members now have the freedom to pursue their own principles in respect of the role of the arms trade and foreign countries in violations of human rights around the world, when determining how their pension monies are invested.”