This year again Palestine was centre stage at the National Union of Teacher’s annual delegates conference in Harrogate during the Easter weekend.

Dozens of NUT delegates flocked to the PSC stall to sign the petition asking for sanctions on Israel, as well as finding out about our current campaigns and to purchase some essential PSC merchandise.

The PSC fringe meeting took place on Easter Monday at lunchtime, and opened with the short educational film launched at the conference featuring Saleh a boy from Hebron, a resource which is part of a joint campaign between NUT and Edukid. The film is available on the charity’s website: www.edukid.org.uk/countries/palestine/videos/

The very well attended meeting featured an impressive line up, including (by Skype) Ahammad Anis, the General Secretary of the General Union of Palestinian Teachers (GUPT), as well as Christine Blower, NUT General Secretary who spoke of the need for action for Palestine and asked all teachers to support PSC’s #VotePalestine campaign to lobby candidates at the general elections – more information www.palestinecampaign.org/vote-palestine/ 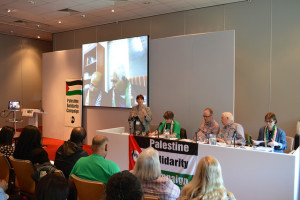 The President of NUT, Philippa Harvey also spoke of her recent visits to Palestine, and East London teacher Kiri Tunks, and representative of Action for Palestinian Children shared with the meeting the ongoing human rights breaches against Palestinian children at the hands of the Israeli army and settlers in the occupied territories.

Bernard Regan, member of the national executive committee of PSC, spoke of the current situation and the need for actions, notably to target complicit companies in the occupation and war crimes like Hewlett Packard – www.palestinecampaign.org/case-hewlett-packard/

The meeting, expertly chaired by Dave Harvey, Chair of the NUT International Committee, drew to a close with a contribution by Nadim Makhalfa, International Officer of the GUPT (by Skype), reminding us that we need to continue to work and campaign against the illegal Israeli occupation of Palestine. 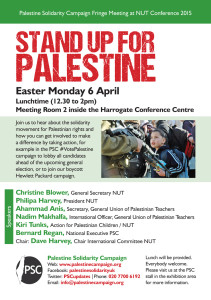