An open letter to Boris Johnson

On the day of the centenary of the Balfour Declaration, we published an open letter in The Guardian calling on the British government to take action to hold Israel accountable for it’s crimes under international law. (Full text below image.) 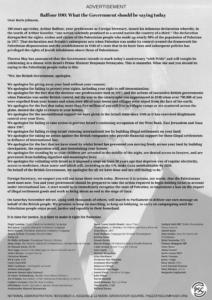 100 years ago today, Arthur Balfour, your predecessor as Foreign Secretary, issued his infamous declaration whereby, in the words of Arthur Koestler, “one nation solemnly promised to a second nation the country of a third.” The declaration disregarded the rights, wishes and claims of the Palestinian people who made up nearly 90% of the population of Palestine in 1917. That declaration and Britain’s subsequent acts when Palestine was under its control created the framework for Palestinian dispossession and the establishment in 1948 of a state that in its basic laws and subsequent policies has privileged the rights of Jewish inhabitants above those of Palestinians.

Theresa May has announced that the Government intends to mark today’s anniversary “with Pride” and will tonight be celebrating at a dinner with Israel’s Prime Minister Benjamin Netanyahu. This is shameful. What she and you should be saying to the Palestinian people today is this:

“We, the British Government, apologise.

We apologise for giving away your land without your consent;

We apologise for failing to protect your rights, including your right to self determination;

We apologise for the fact that the decision our predecessors took in 1917, and the actions of successive British governments when Palestine was under British control, led the way to the catastrophe you experienced in 1948 when over 700,000 of you were expelled from your homes and when over 400 of your towns and villages were wiped from the face of the earth;

We apologise for the fact that today more than five million of you still live in refugee camps or are scattered across the globe, denied the right to return to your homes;

We apologise for the unconditional support we have given to the Israeli state since 1948 as it has exercised illegitimate control over your lives;

We apologise for failing to take action to prevent Israel’s continuing occupation of the West Bank, East Jerusalem and Gaza since 1967;

We apologise for failing to stop Israel violating international law by building illegal settlements on your land;

We apologise for taking no action against the British companies who provide financial support for these illegal settlements in defiance of international law;

We apologise for the fact that we have stood by whilst Israel has prevented you moving freely across your land by building checkpoints, the separation wall, and demolishing your homes;

We apologise for standing by as your children are arrested in the middle of the night, are denied access to lawyers, and are prevented from building dignified and meaningful lives;

We apologise for colluding with Israel as it imposed a siege on Gaza 10 years ago that deprives you of regular electricity, access to medicines, clean water and which will, according to the UN, make Gaza uninhabitable by 2020.

On behalf of the British Government, we apologise for all we have done and are still failing to do.”

Foreign Secretary, we suspect you will not issue these words today. However it is actions, not words, that the Palestinians need most now. You and your government should be prepared to take the action required to begin holding Israel to account under international law. A start would be to immediately recognise the state of Palestine, to implement a ban on the import of illegal settlement goods and work to bring about an end to the siege of Gaza.

On Saturday November 4th we, along with thousands of others, will march to Parliament to deliver our own message on behalf of the British people. We promise to keep on marching, to keep on lobbying, to carry on campaigning until the Palestinian people enjoy peace, justice and equality in their homeland.

It is time for justice. It is time to make it right for Palestine.