The National Union of Students – which represents 7 million students in the UK – have voted to condemn Israel’s murderous assault on Gaza, demand the siege on Gaza is lifted, demand the UK government stop arming Israel and call upon the student movement to boycott companies and corporations that facilitate Israel’s military capacity, human rights abuses and illegal settlement activity.

The vote to condemn the Israeli attack on Gaza was unanimous. The vote in support of boycotts, divestment and sanctions, saw 23 members vote in favour to 18 against by the NUS National Executive Council – this represents a further breakthrough in the student solidarity movement for Palestine.

Malia Bouattia, NUS Black Students’ Officer, and key proposer of the motions described the recent decision as a ‘long awaited victory’ and said that she was ‘proud to be part of succession of Black Students Officers that have consistently and unequivocally campaigned for the freedom of Palestine, and now finally won the debate within the NUS.’

She added ‘now that the NUS has finally passed this progressive policy we have a lot to celebrate. However in the same breath there is much more work to be done. The past resistance of the NUS to support this campaign means that we will have to push for complete implementation. Moreover there are those within and outside of the student movement that still refuse to see the plight of the Palestinians for what it is.’

‘So the struggle continues, but this victory alongside the global sea change of public opinion gives us new hope. The Black Students Campaign remains committed. We will continue to protest, march, boycott and campaign. And we will not stop until the rights of Palestinians are restored and Palestine is free.’ 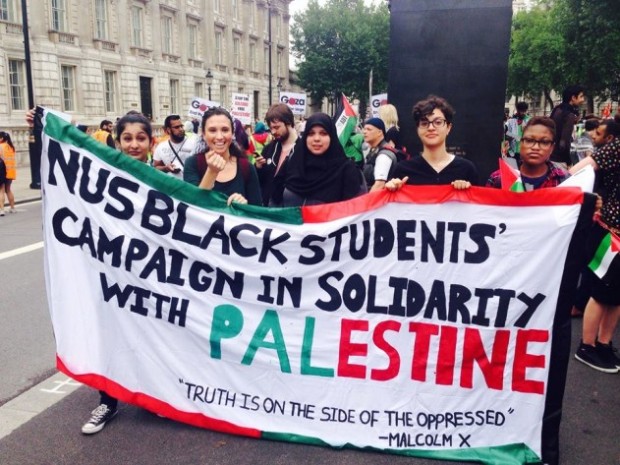 The motions submitted by Malia Bouattia received widespread backing from various sections of the National Union of Students, with support from the NUS Disabled, LGBT and Women’s & International Students’ Campaigns, NUS-USI and NUS Scotland.
Gordon Maloney, NUS Scotland President spoke in favour of the BDS motion and made clear in his speech, that the motion was not a ‘blanket attack on Israelis’, ‘not about silencing moderate voices, or isolating those in Israel who are fighting for peace’ but that the motion ‘is about doing what our government won’t – that when Israel breaks international law, again and again, that there are consequences, and whether it’s illegal settlements or human rights abuses, Israel is quite literally getting away with murder. As the motion says, our government is unwilling to even condemn Israel for this assault, we now have no choice, as civil society, but to exert economic and political pressure to force Israel to abide by international law.’

He finished off his speech by urging NEC members to remember that, ‘NUS, our movement, has a proud, proud record of breaking rank to do the right thing, and history is going to look back at us. If, like me, you’ve been horrified to watch this massacre unfold, then this is your chance to do something. Let’s not waste it.’

Zarah Sultana, who was at the forefront of the #nus4bds social media campaign in support of the motion said, ‘I am very proud to have seconded the motion advocating BDS, spoken in support of it at the NEC meeting and being one of the 23 NEC members to have voted yes. BDS as a strategy has been called for by the Palestinians themselves as part of their non-violent resistance against military occupation, ethnic cleansing, war crimes and apartheid. It is therefore our duty to answer that call – not as Arabs, or Muslims but as humans who want to stop the suffering of a defenceless people.’

Sultana added: ‘In the 1970s and 1980s, NUS was at the forefront of campaigning against apartheid in South Africa and continued pressure from students contributed to Barclays Bank withdrawing its investment and support for the Apartheid regime. NUS was instrumental in setting up a network of anti-apartheid activists in the 1970s at almost every union across the UK. On Mondya, the NUS again stood on the right side of history by joining a list of unions such as the National Union of Teachers, Unite and the Trade Union Congress as well as organisations such as RIBA and The Co-operative by supporting BDS.’

Students across the country will continue taking action in support of the Palestinian struggle for justice and pro-Palestine members of the NEC will be vigilant in making sure that these new policies are fully implemented and upheld. 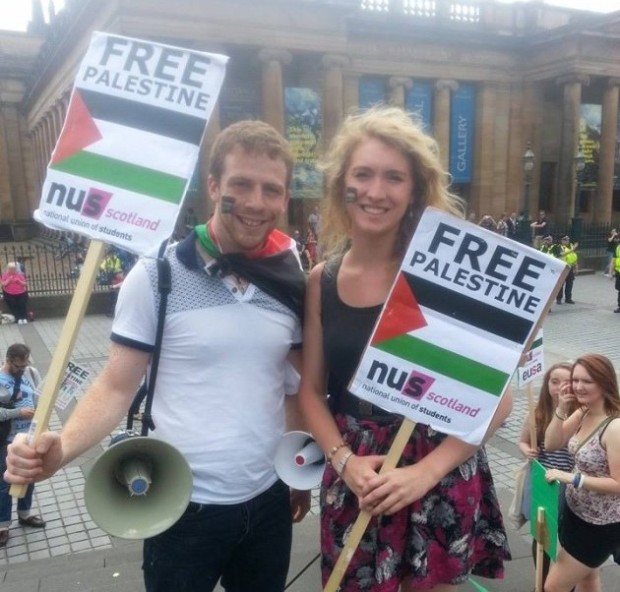