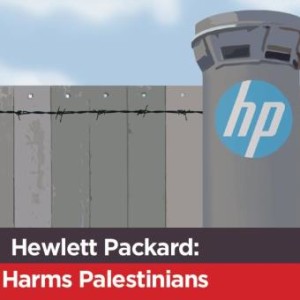 Join us and take part in the PSC National Day of Action on Hewlett Packard on Saturday 4th June, as part of a co-ordinated day of activities  across the UK, with a common message and a common approach. The key focus is to raise public awareness of the Occupation and HP’s role.

HP is a key target for the Boycott National Committee (BNC) and is part of PSC’s overall plan. The objective of the Day of Action is to highlight HP’s deep participation in Israel’s brutal Occupation and its apartheid system and to encourage more and more people to sign the pledge not to buy HP products.

Details of the day of action, a new website dedicated to the campaign and a range of resources will be available soon. Stay in touch for more information very soon.

HP is the second largest investor in Israeli Information Technology (IT). Its technology and equipment facilitate both the illegal Israeli occupation and apartheid, especially through the development of its biometric system used for population and territorial control and surveillance of Palestinians both inside Israel and in the occupied Palestinian territory.