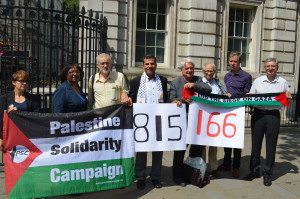 Today, MPs Jeremy Corbyn, Diane Abbott and Jim Fitzpatrick, along with the film director Ken Loach, and Hugh Lanning (Chair) and Sarah Colborne (Director) of Palestine Solidarity Campaign handed in an open letter to the Prime Minister at 10 Downing Street calling for an immediate arms embargo on Israel.

PSC put the letter on its website on the morning of Wednesday 23rd July. By the evening of Thursday 24th, the open letter had been signed by more than 21,000 members of the public. Their signatures were also handed in with the letter.

Speaking outside Downing Street today, Hugh Lanning said: “Our aim is to stop the Israeli government getting military aid and equipment from the British government. Our aid and arms help kill innocent Palestinian civilians. We need to isolate apartheid Israel now and impose sanctions now.”

Jeremy Corbyn MP: “The UK has a very close relationship with Israel, including buying and selling arms, and it’s time that this relationship was brought to an end since Israel is now under investigation for war crimes over the bombing of Gaza. I received an email from Dr Mads Gilbert, working in Shifa Hospital, and it brought tears to my eyes when he was describing the pools of blood, the electricity cut off, the lack of clean water and the continuous surge of the dead and injured pouring into the hospital. It’s people like that who are saving lives, and Israel which is taking lives.”

Ken Loach: “It’s disgraceful that our government is arming the state of Israel to continue its slaughter of civilians, of women and children. Everyone must be devastated by the sight of the maimed and the dead in Gaza, and everyone must direct their anger towards the Israeli war machine.”

Bobby Gillespie, who signed the letter, said: “Our hearts and love are with the Palestinian people. We support their continuing fight for human rights and dignity and righteous resistance to Israeli imperialism, occupation and war crimes.”

PSC and other organisations have called a march and rally in London tomorrow (26th July), which will also demand an end to the arms trade with Israel.

Protesters will gather at the Israeli embassy, Kensington, at midday and march to Parliament. Speakers including children’s author and poet, Michael Rosen, comedian Jeremy Hardy and guitarist and music producer Dave Randall, will be among those addressing the rally at Parliament Square at 2.30pm.

* The letter can be viewed here: http://act.palestinecampaign.org/petition/camerongaza

The public figures who signed the letter: