Home / Blog / Latest news / Your message to The Cabinet Office

Your message to The Cabinet Office

Last week we sent a letter to Ben Gummer, the recently appointed Minister of the Cabinet Office. Enclosed were the signatures of 8,759 of you.

These were the signatures of the almost nine thousand of you who signed a postcard from Palestine, as a petition against Government proposals to curtail our right to boycott. Earlier this year, his predecessor Matthew Hancock traveled all the way to Israel to announce the UK Government will issue regulations that try to prevent councils from making ethical decisions.

Local authorities should be able to decide what companies to buy from, invest in or offer contracts to. This Government interference is against the spirit of democracy, localism, and devolution. Thank you to everyone who signed the petition.

Boycott is the tool that human rights defenders have used through history – it is a traditional, peaceful and effective form of protest. We are part of a worldwide movement responding to the Palestinian led call for boycott, divestment and sanctions until Israel abides by international law.

Israel has shown by its actions that it is not interested in peace – rather it continues to build illegal settlements on land stolen from Palestinians, continues to enforce a brutal military occupation, continues to treat Palestinian citizens of Israel as second class citizens, continues to refuse to allow Palestinian refugees their right to return. Israel continues to flout international law and our government does nothing to hold them to account. So we have to.

It is not only our right to boycott Israel, it is our duty. With this petition we have sent a strong message to the government that we will do everything we can to defend this right.

Thank you to all those who signed the Greetings from Palestine postcard petition. 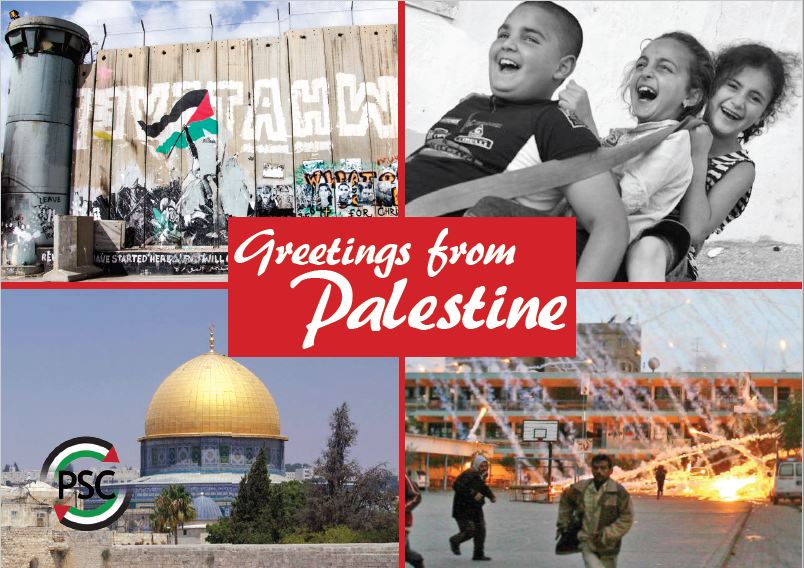