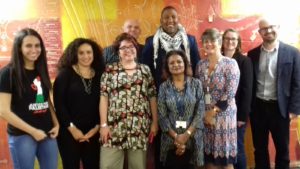 Nkosi Zwelivelile, an African National Congress MP and grandson of Nelson Mandela, spoke out against Israeli apartheid during a visit to the UK this week.

On Tuesday 11 October 2018, the Palestine Solidarity Campaign organised a briefing with union officials and NGO leaders to build international links and discuss the parallels between Israel’s treatment of Palestinians and the former apartheid regime in South Africa.

In an op-ed for the Guardian, Zwelivelile – also known as Mandla Mandela – wrote:

Like Madiba and Desmond Tutu before me, I see the eerie similarities between Israel’s racial laws and policies towards Palestinians, and the architecture of apartheid in South Africa. We South Africans know apartheid when we see it. In fact, many recognise that, in some respects, Israel’s regime of oppression is even worse.

Paying tribute to “Palestinians’ resolute determination to resist” and Ahed Tamimi in particular, Zwelivelile emphasised the importance of international solidarity in both the South African and Palestinian case. He urged support for the Boycott Divestment and Sanctions (BDS) movement and cited his grandfather Nelson Mandela’s words that the question of Palestine is the “greatest moral issue of our time” and that:

our freedom is incomplete without the freedom of the Palestinian people.