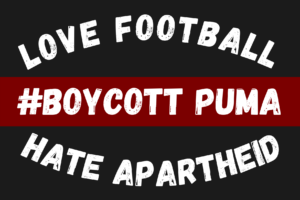 Israel uses football to maintain its regime of settler-colonialism, military occupation, and apartheid against Palestinians.

The Israel Football Association (IFA) governs and advocates on behalf of football clubs in illegal Israeli settlements, built on land stolen from Palestinians. Every settlement is a war crime under international law – pushing indigenous Palestinian families off their land, robbing natural resources, and denying Palestinians their right of movement.

Puma, a global sportswear manufacturer, is lending legitimacy to Israel’s colonisation of Palestinian land through its sponsorship of the Israel Football Association. Over 200+ Palestinian football teams have called on Puma to terminate this unethical sponsorship. However, Puma has ignored their demands.

Puma is using its brand to whitewash Israel’s human rights abuses. Palestinians, including Palestinian footballers, are subject to routine militarised attacks and imprisonment.

With so much attention on the world of football, we’re asking you to stand in solidarity with Palestinian footballers and share that you will #BoycottPuma until it ends its complicity in Israeli apartheid.

“This World Cup, I’m standing with Palestinian footballers by committing to #BoycottPuma until it ends its sponsorship of the Israel Football Association, which advocates for football clubs in illegal Israeli settlements on stolen Palestinian land.”

“Palestinian footballers have asked @PUMA to stop supporting Israeli apartheid and end its sponsorship of the Israel Football Association. Puma’s ignored them.

So, I’m committing to #BoycottPuma until it stops supporting injustice!”

“Football fans are committing to #BoycottPuma until it ends its sponsorship of the Israel Football Association. The IFA governs on behalf of football teams on stolen Palestinian land.

@PUMA is using its brand to legitimise Israel’s land theft.”