National Lobby of Parliament for Palestine

Thank you to all our members and supporters who supported our fantastic lobby day in Parliament for Palestine. Over two thousand of you asked your MP to support the Lobby. Many other MPs met with representatives from Palestine Solidarity Campaign, Israeli Committee Against House Demolitions, Pax Christi, Palestinian Mission and other organisations.

In the evening we held a rally for lobby supporters, where a number of prominent MPs spoke up for Palestinian rights. 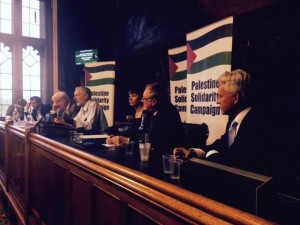 Hugh Lanning, chair of Palestine Solidarity Campaign, introduced Sir Alan Duncan MP, Conservative MP and former Minister of State for International Development.  Sir Alan spoke of the shocking scenes of apartheid he saw in Hebron. He spoke of the need to convince more Conservative MPs and that settlements are illegal and unacceptable should be the starting place for those conversations. Jeremy Corbyn MP was also met with rapturous applause, and particularly thanked Sir Alan Duncan for his speech on the Middle East in the House of Commons, before introducing Caroline Lucas MP. Caroline talked about the terrible situation for those in Gaza, and said it was time to look at economic measures, including the rescinding of the EU-Israel Association Agreement. She also pressed the UK to follow the example of Sweden and to recognise Palestine. Richard Burden MP reminded us that people can become to blasé about the statistics of war. The Britain-Palestine All Party Group heard from surgeon, Dr Mads Gilbert, who described working in war-torn Gaza, having to decide who got anesthetic and who did not.

Period of ‘relative quiet’ in Gaza – but there have been 16 military incursions by Israel this year. @RichardBurdenMP #PalLobby

Rafah – the main crossing between Palestine and Egypt – has been closed for all but 18 days since the last war in Gaza. Palestine’s right to self-determination and the lifting of the siege of Gaza should be the major focus of the campaign.

Conservative MP for Twickenham, Dr Tania Mathias, spoke about her experience working as a medic in Gaza with UNRWA. Her vision is that we work together to ‘create a bright future for Palestine’.

Labour frontbencher, Andy Slaughter MP, focused too on the problem of settlements: ‘settlements are an obstacle – why are we trading with illegal entities?’ he asked. Banning trade with settlements would be the best next step. He also pressed for cross-party support for recognition of Palestine.

Labour’s Debbie Abrahams MP talked about her visit to the West Bank in 2012. When she described what she had seen to her father, who was born in Apartheid South Africa, he said the segregated roads and problems farmers had access their land sounded like the problems they faced in South Africa.

Debbie is keen to promote justice for Palestinian children, who face a justice system based on ethnicity.

Grahame Morris MP – as the instigator of the motion for Palestinian recognition – was warmly received and told the audience ‘don’t give up – we are winning!’ New MP for Lancaster and Fleetwood, Cat Smith, urged the crowd to ‘keep up the lobbying of Parliament and MPs’. She said ‘ticking off Israel’ was not enough and there was a need for peaceful, economic pressure.

SNP’s Stewart McDonald MP was sworn into Parliament wearing his Palestine lapel badge. He reminded us of the strong support for Palestinian rights north of the border. SNP supports an embargo of Israeli arms.

Stewart MacDonald – the SNP will be pushing in Parliament for an arms embargo #PalLobby pic.twitter.com/YNulIXWtBK

Dr Philippa Whitford MP is a former surgeon who worked in Gaza just before the first intifada. She reminded us of Palestinians’ zest for life –their hospitality, love of music and culture is a heritage they share with the Irish and Scottish. The friends in Gaza that she is still in touch with have described the conditions which – terrible though they were in the 1990s – are much worse now. Philippa called for citizen action of the kind inspired in the campaign against Apartheid South Africa. Politicians and citizens must work together to end this injustice. Palestine Solidarity Campaign, Campaign Against the Arms Trade and War on Want have commissioned a report from phD candidate, David Wearing, about the two-way arms trade between Israel and the UK. He blasted the UK policy of only cancelling arms licences to Israel ‘if significant hostilities broke out’ when Vince Cable, the then Business Secretary of State had no definition of what that meant, and when Israel began bombing Gaza again it was deemed ‘not significant enough’ although people were being killed. ‘One bullet is one bullet too many’ as David reminded us. Hugh Lanning introduced the Palestinian Ambassador saying how hard it must be to do is job when Israel is funded and supported by the EU and UK Government whilst Palestine is ignored. Hugh outlined the growing cross-party nature of the campaign, and the fact we will be attending all the main party conferences for the first time. Hugh called on the audience to

The Ambassador Manuel Hassassian talked about how Apartheid was embedded into the Israeli Government’s approach, their whole treatment of the Palestinian people. The Ambassador told the audience the Palestinians will go to the International Criminal Court to seek justice.