This week Liverpool FC announced they will be signing Nike, rather than Puma, as their official kit suppliers from next season onwards. Their decision comes amidst a growing international campaign for sports teams to boycott Puma over their complicity with Israeli war crimes.

Puma is the main sponsor of the Israel Football Association (IFA), which includes football clubs based in illegal Israeli settlements on stolen Palestinian land. All settlements are considered war crimes under international law.

As one of the world’s top athletic apparel makers, Puma’s sponsorship brings international legitimacy to the IFA and helps maintain its direct involvement in supporting illegal settlements. Over 200 Palestinian teams have called on Puma to end its support for Israel’s military occupation by terminating its sponsorship deal with the IFA – but Puma has ignored these requests.

Summer reports positioned Puma as a strong contender vying for the lucrative new kit deal with Liverpool FC. Over the last six months, however, the international campaign against Puma has gained momentum, with over 30,000 emails sent from football fans urging UK clubs to ditch Puma kit sponsorship deals.

“We welcome Liverpool FC’s decision not to deal with Puma, and thank the hundreds of PSC supporters who wrote to them about the #BoycottPuma campaign. This is a great start, and we urge other clubs to follow suit. To ensure no complicity with Israeli war crimes, we also call on Liverpool FC to end its partnership with AXA insurance – which has ties to Israeli arms manufacturer Elbit Systems and invests in Israeli banks which finance illegal settlements.” 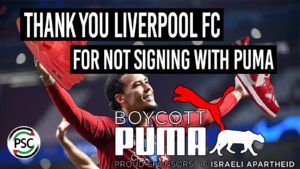