On Wednesday 20th March, during Israeli Apartheid Week 2019, students at over 30 UK universities are taking action on their campuses to demand that their institutions get #ApartheidOffCampus and #StopArmingColonialism by ending their complicity in Israel’s apartheid regime. Throughout the day we will be updating this page to post the latest news and events from students taking action across the country. To support students in their action, please get involved with our Twitter storm! 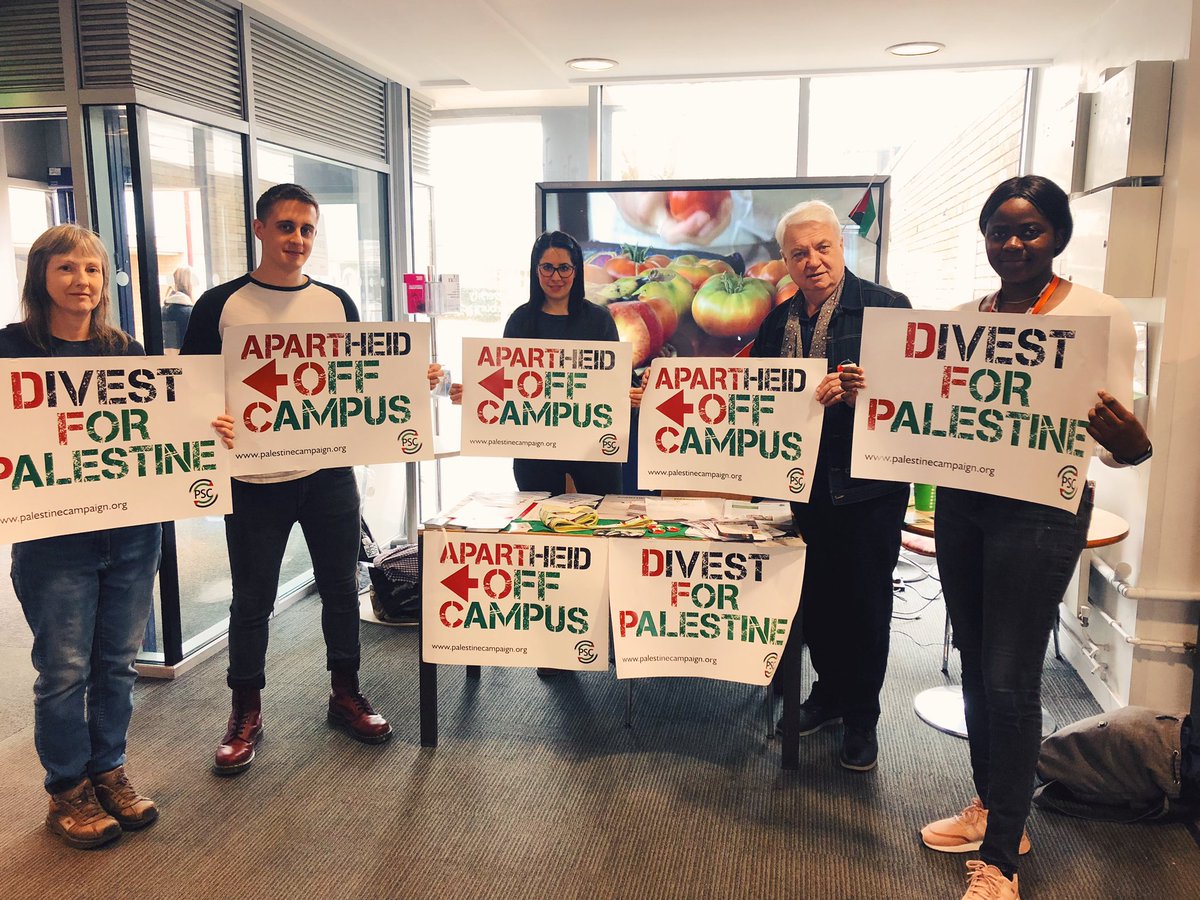 Wolverhampton students continue to spread the #ApartheidOffCampus campaign at their SU 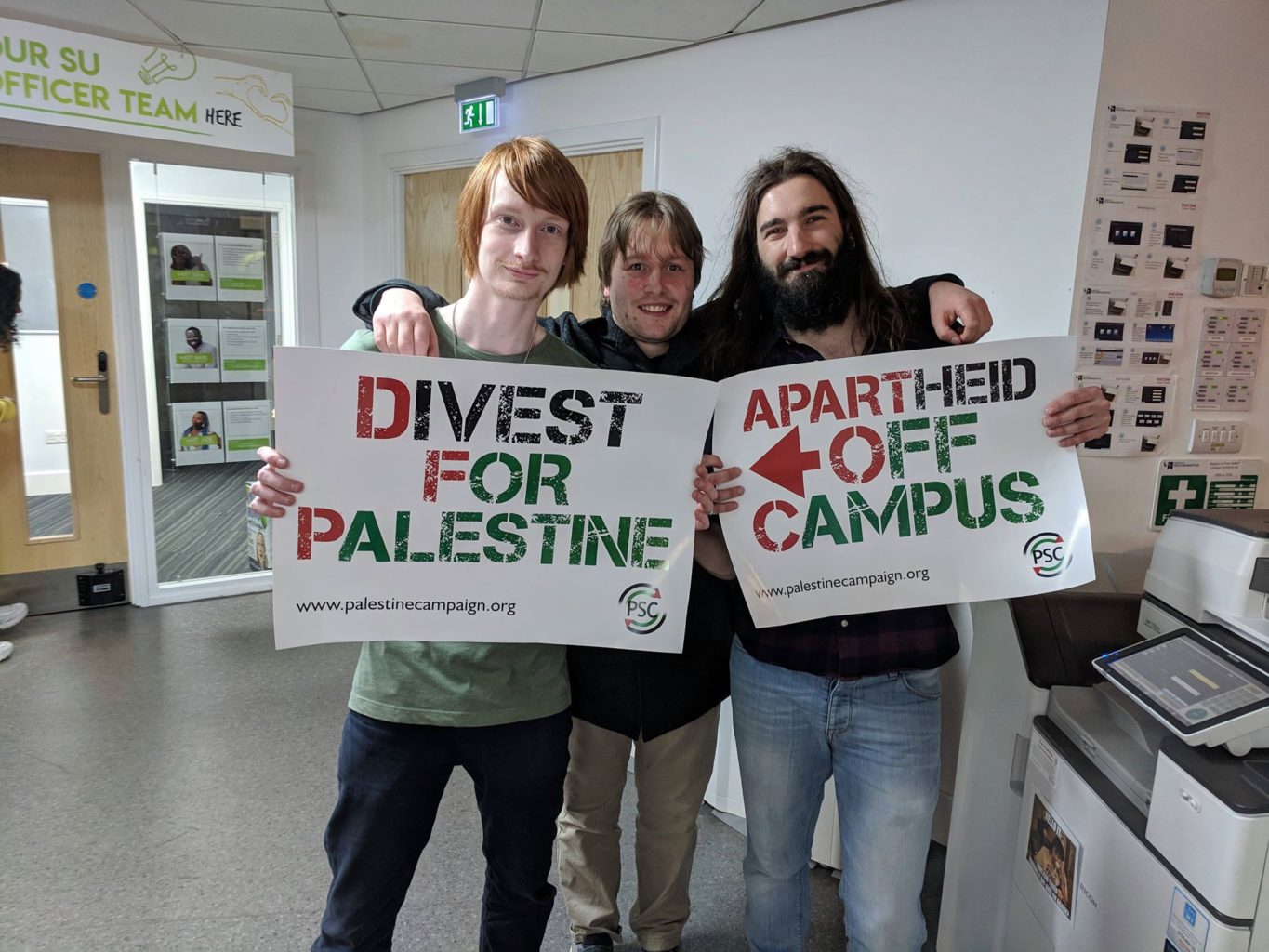 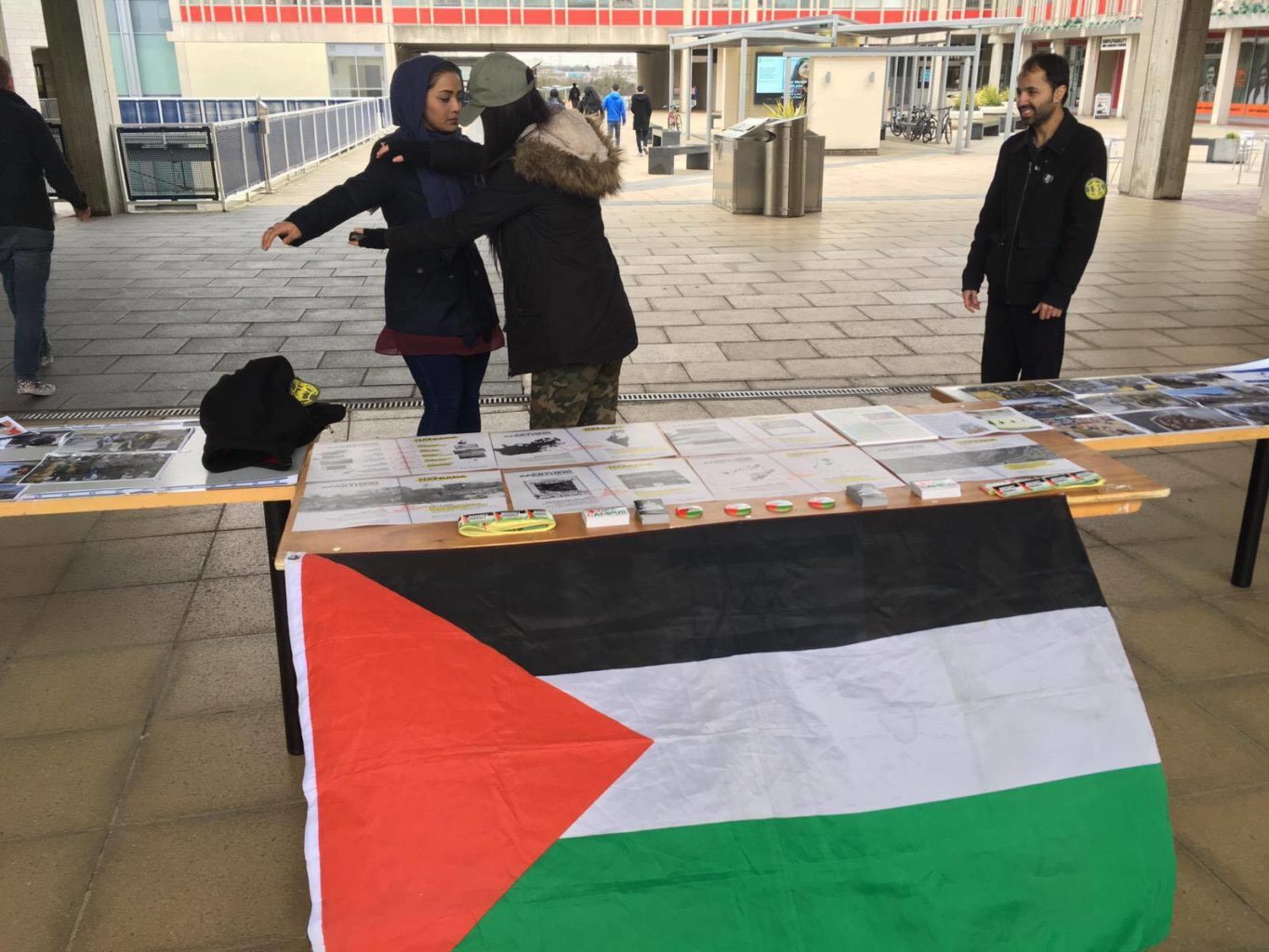 Students at Aberdeen university plaster their SU with #ApartheidOffCampus materials 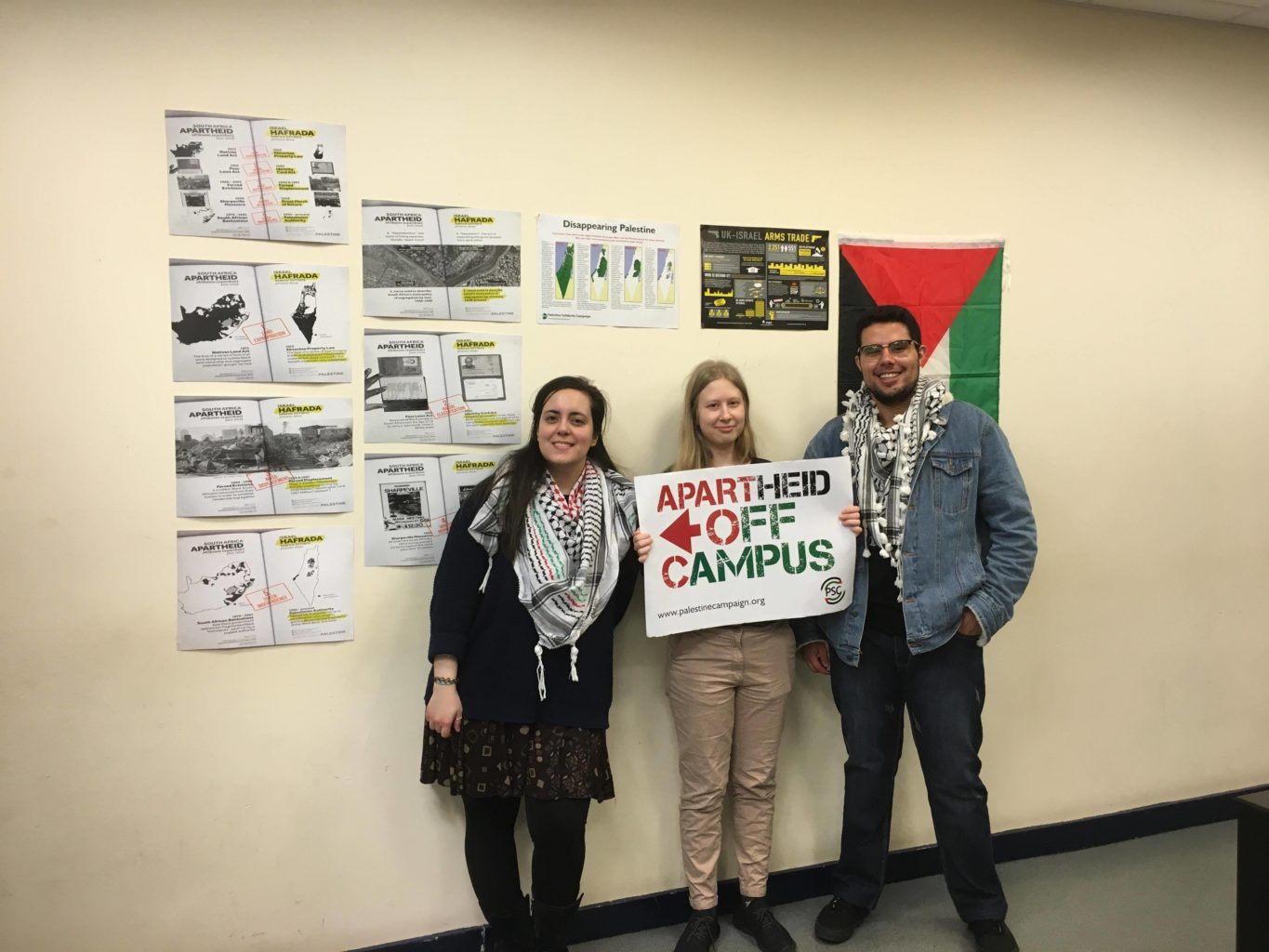 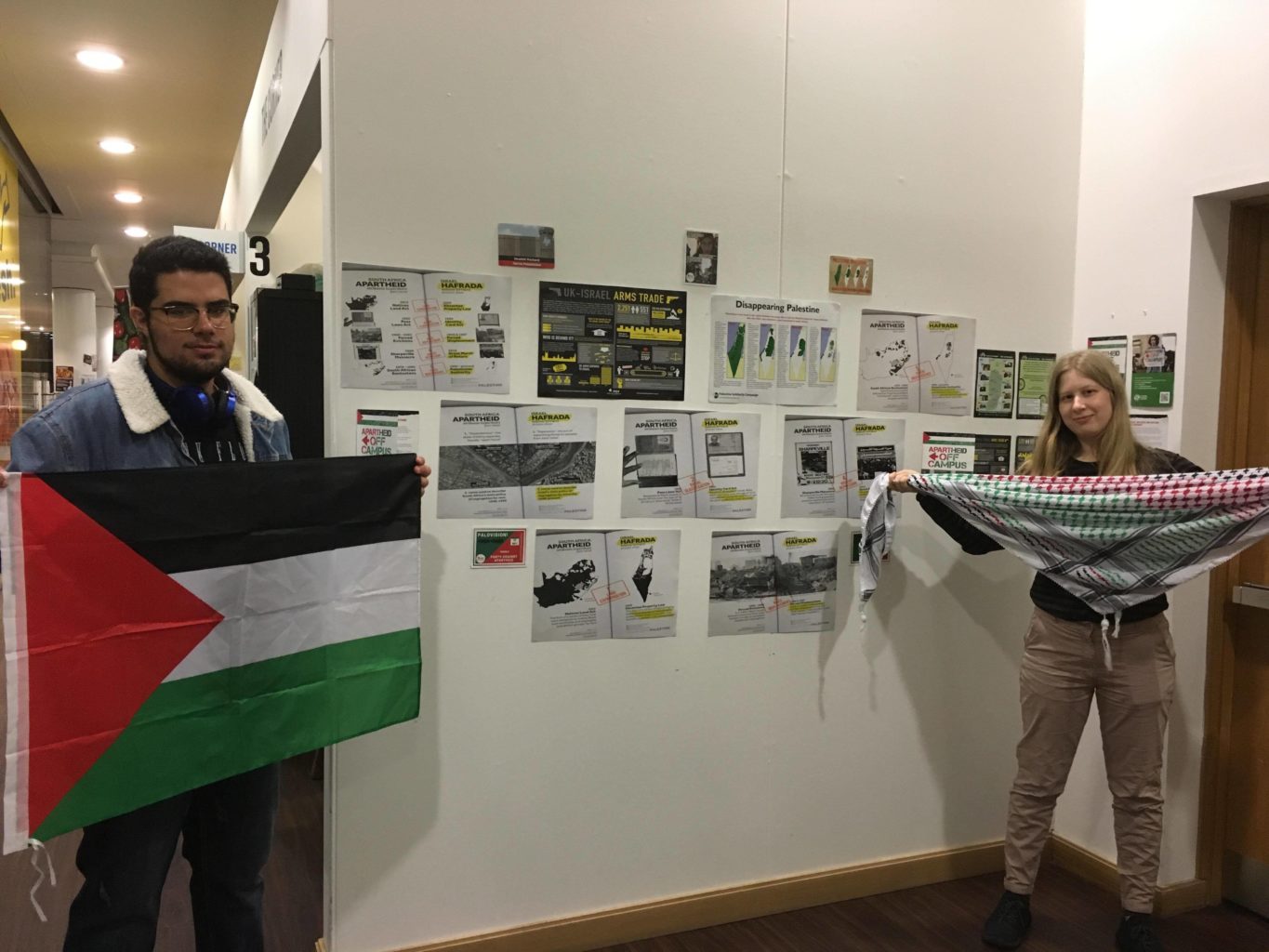 Leicester students launch their campaign calling for their university to divest from companies arming Israel. Time for #ApartheidOffCampus 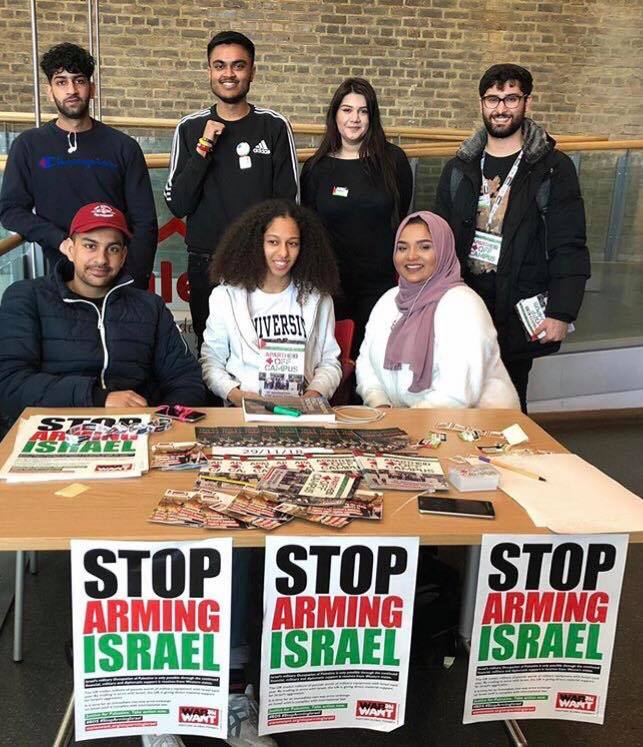 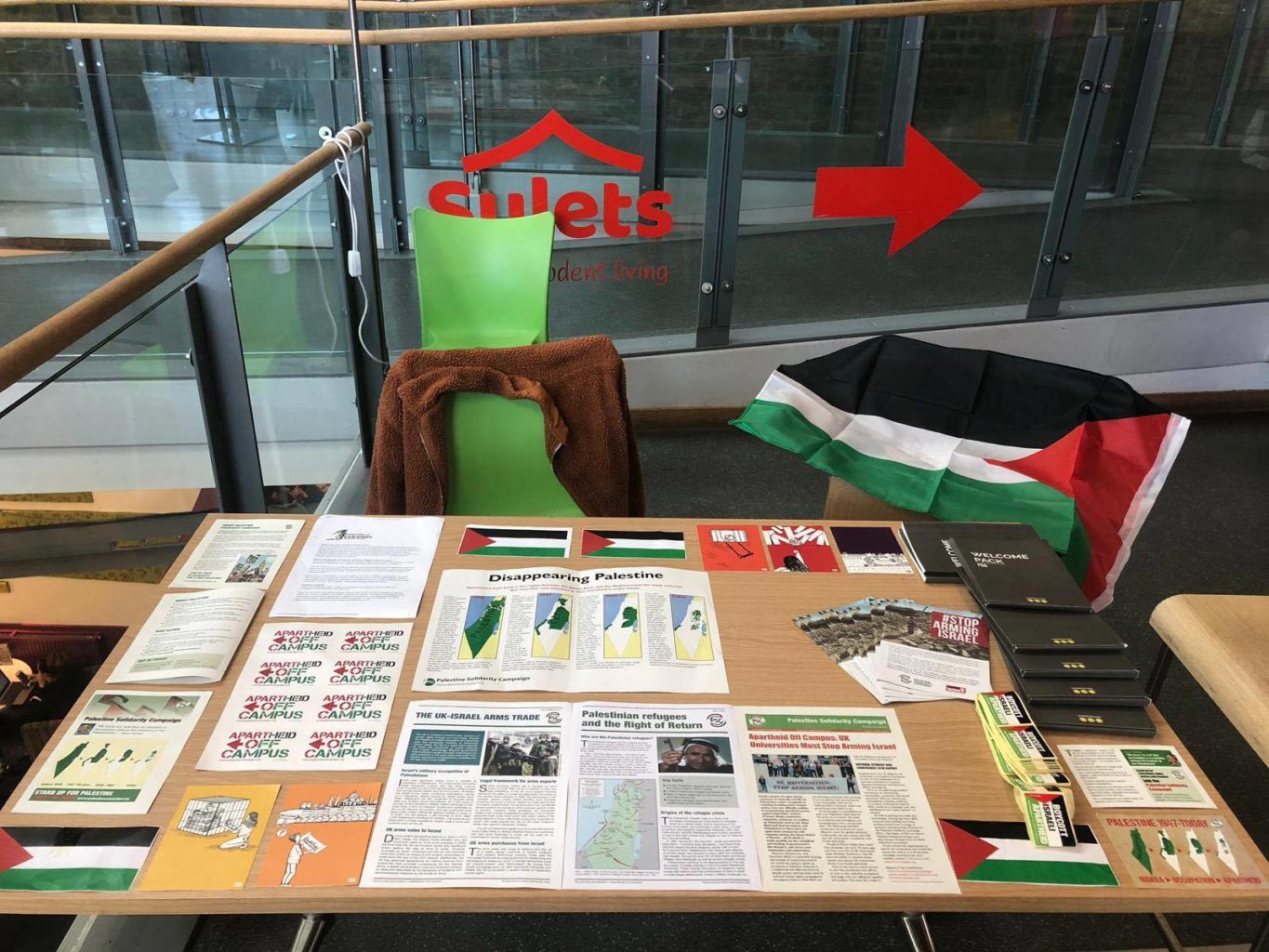 Students at Leeds continue to write messages against Israeli apartheid and in solidarity with the Palestinian people. #ApartheidOffCampus 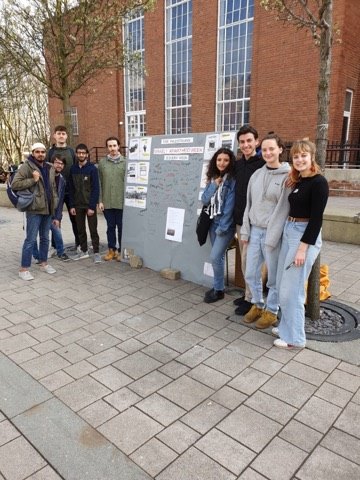 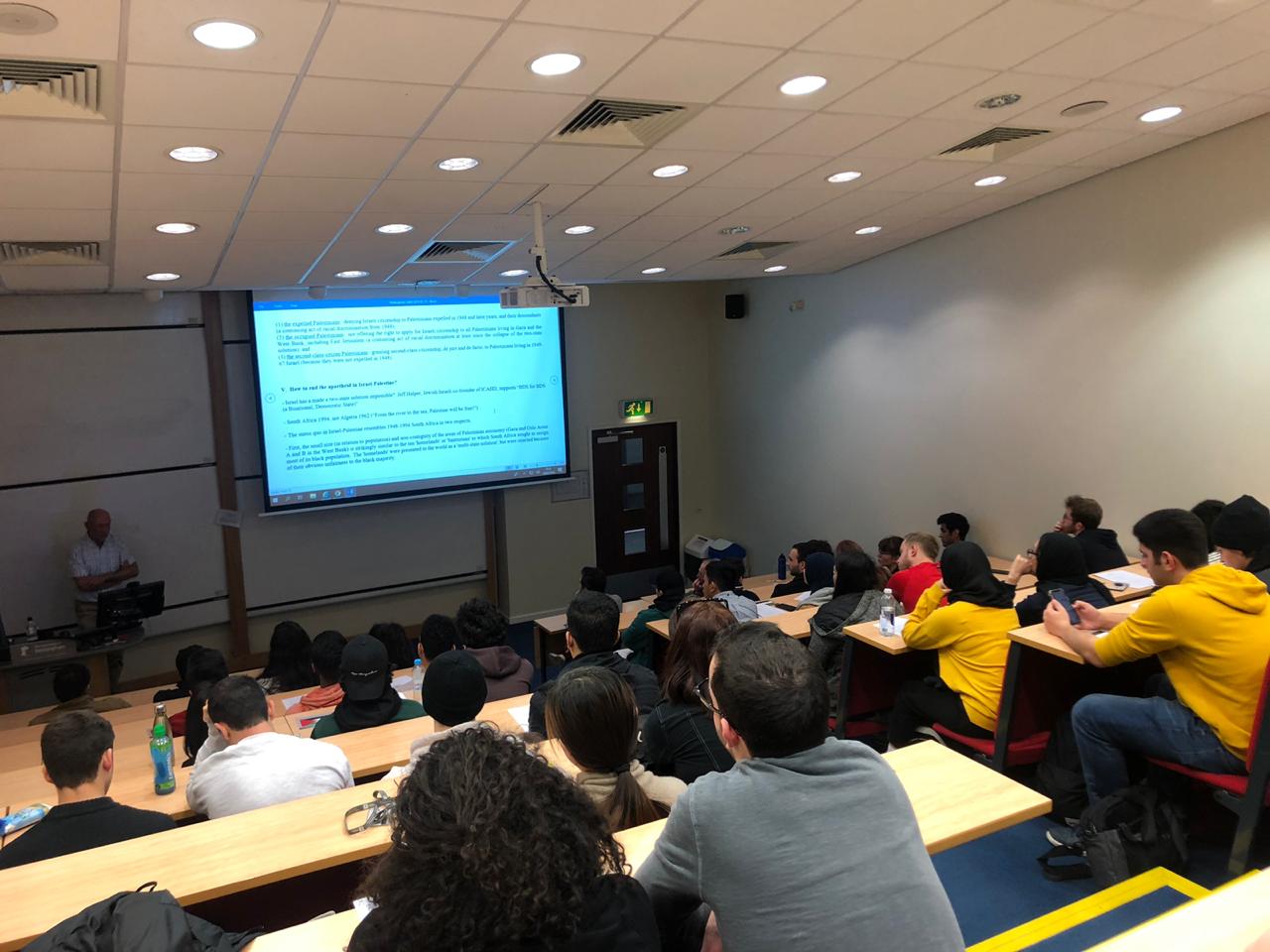 Brighton students are talking to others about the importance of #ApartheidOffCampus in order to decolonise UK universities! 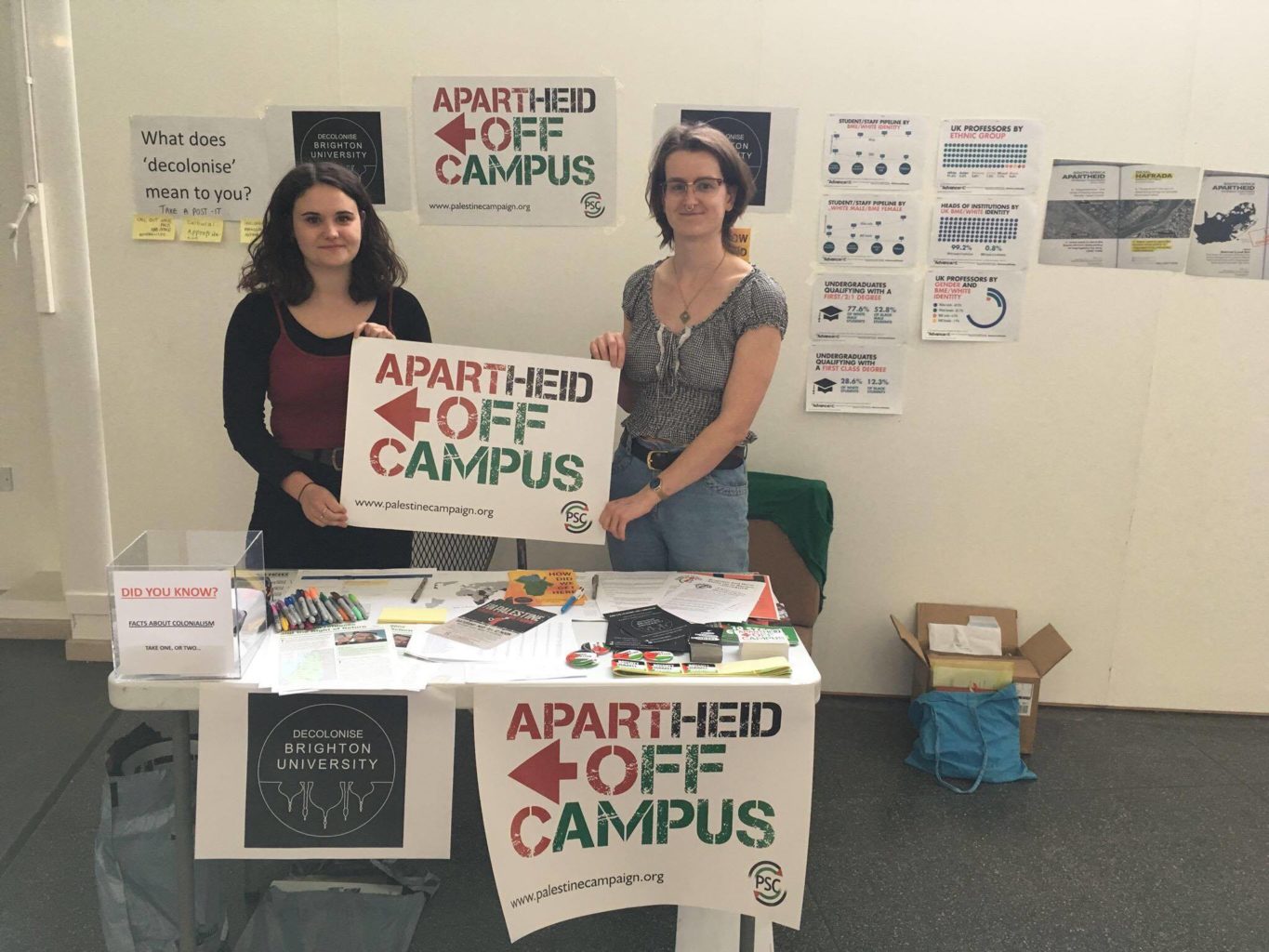 Manchester students march through their university and Oxford road to demand their university divest from Caterpillar, a company which supplies the Israeli army with bulldozers used to demolish Palestinian homes, construct Israel’s illegal settlements and apartheid wall. Time for #ApartheidOffCampus 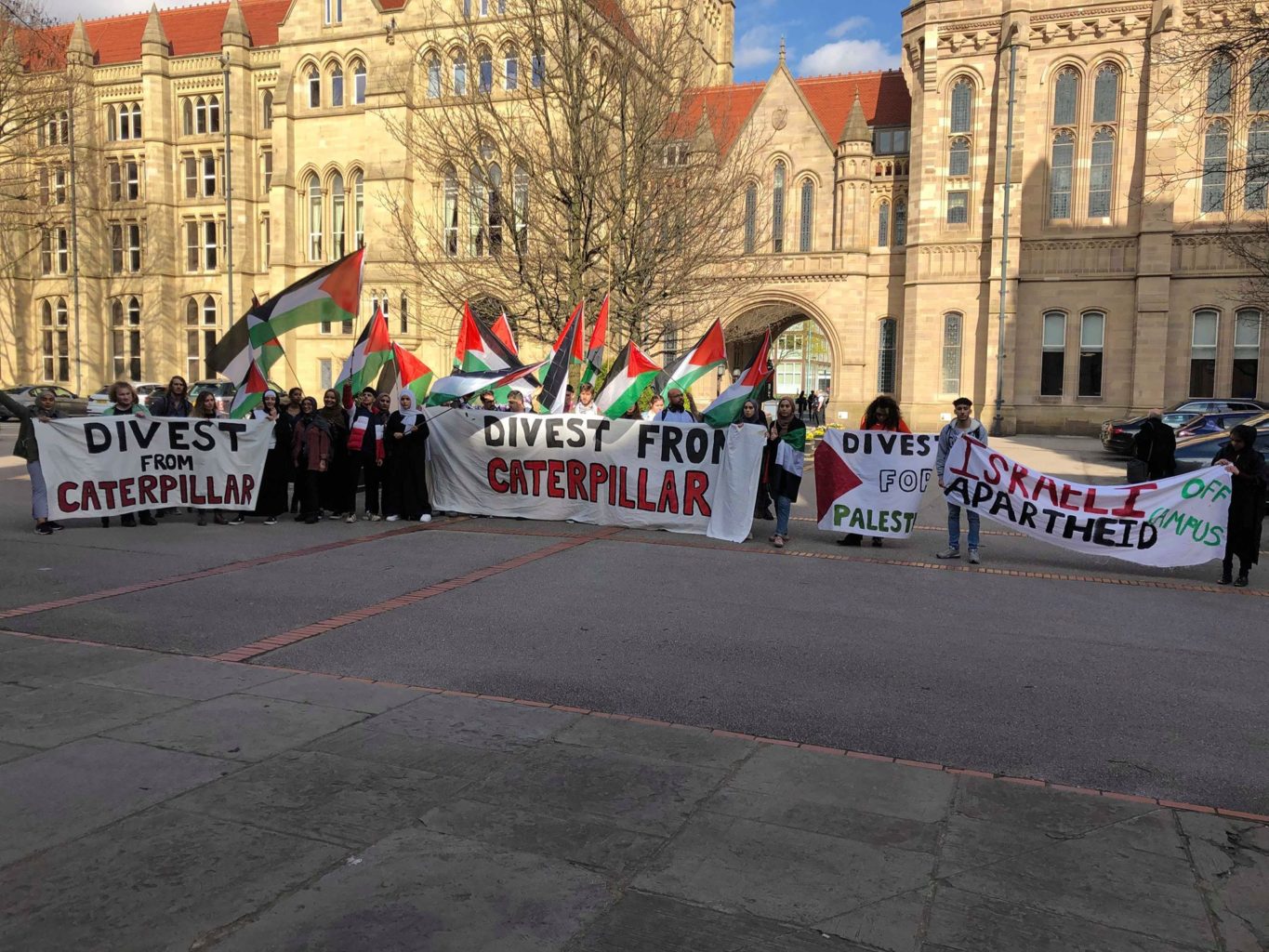 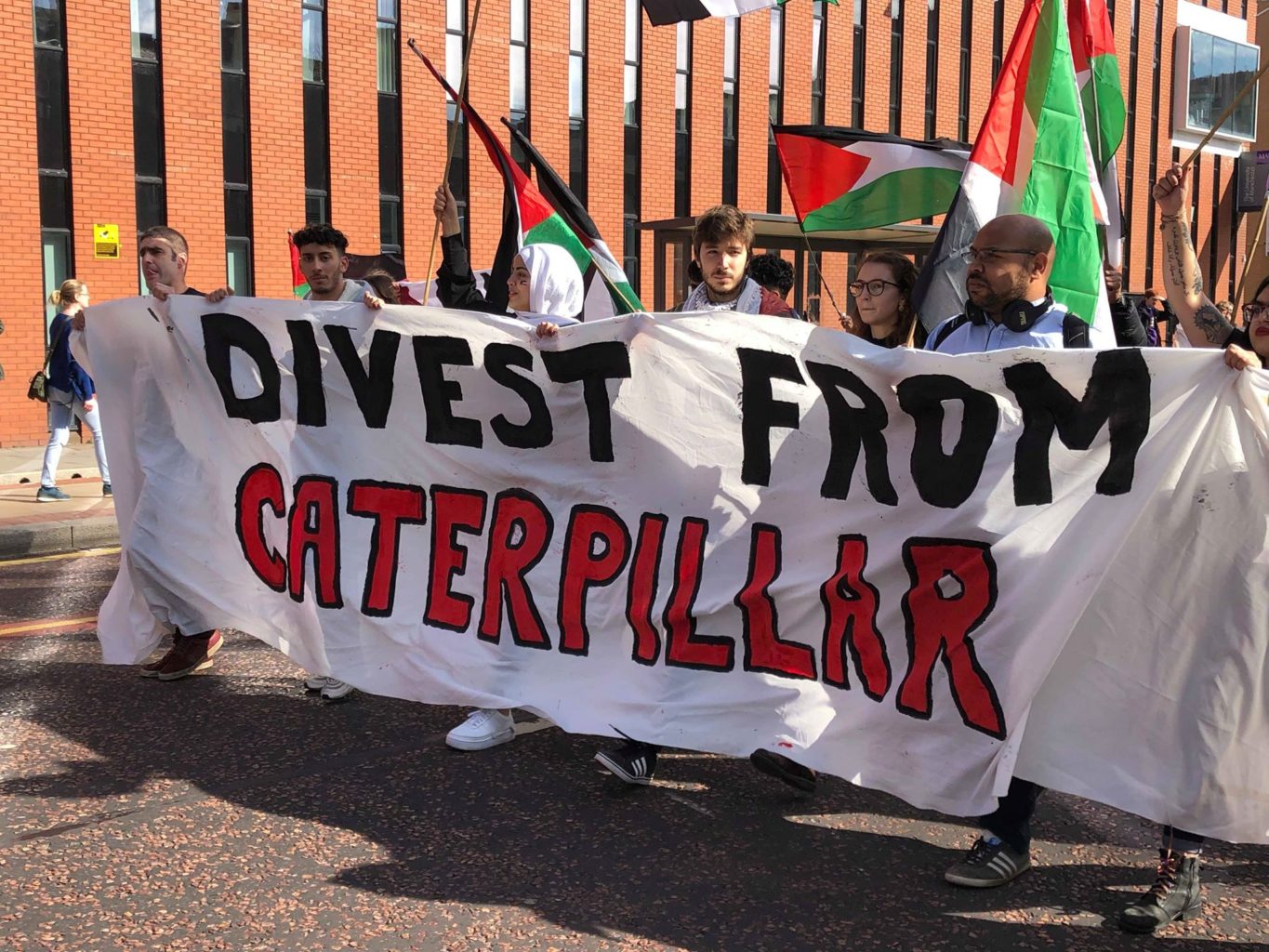 Students at KCL remain undeterred by their university attempts to crackdown on student activism, and are protesting KCL to end their partnership with Technion, Israel’s leading research and development institution for Israel’s arms trade. 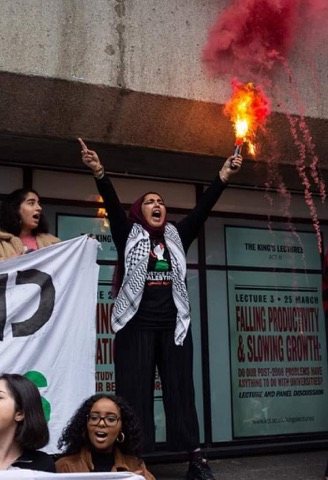 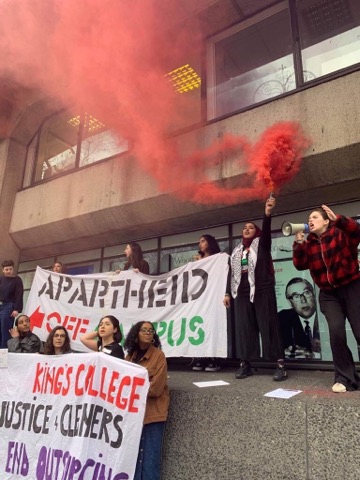 Students at City university host a stall to build their campaign for #ApartheidOffCampus ! 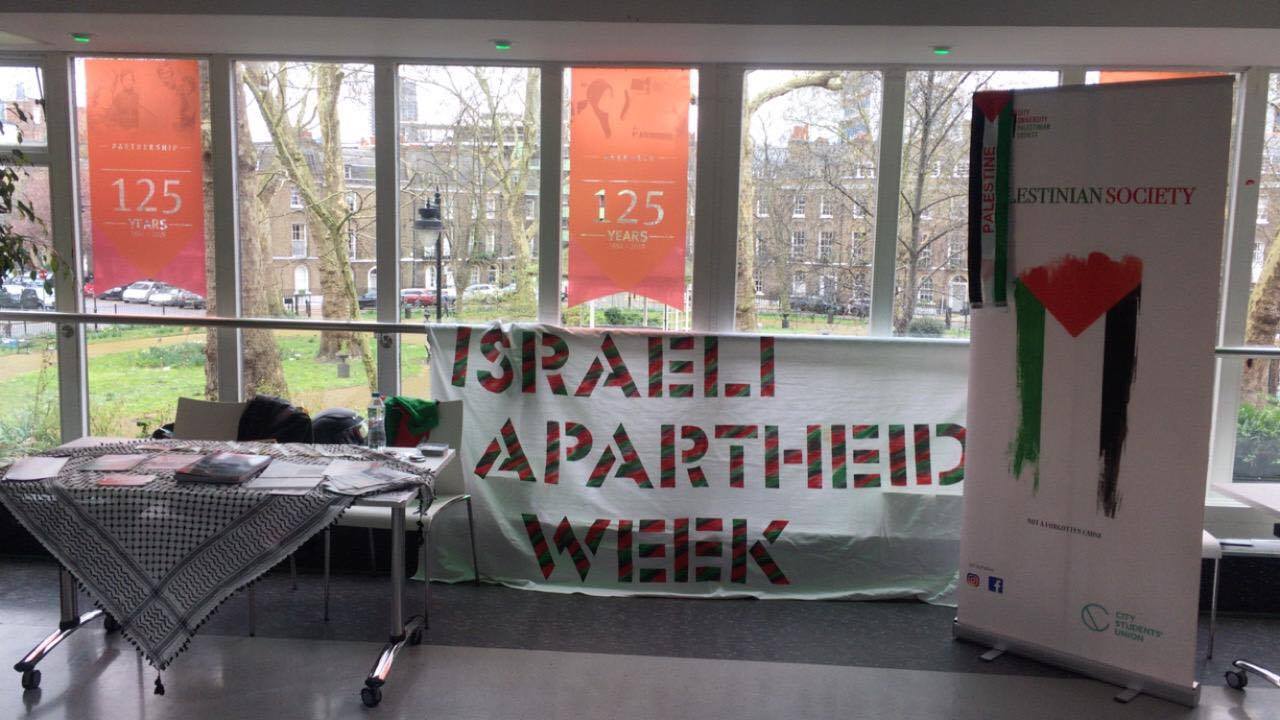 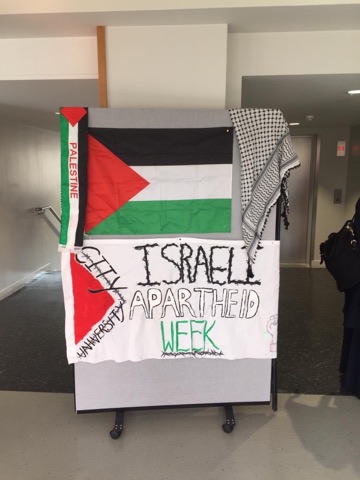 1:15pm
Students from both Sheffield and Sheffield Hallam university join together to protest both University’s links to companies arming Israel, including Caterpillar, BAE, Boeing and more 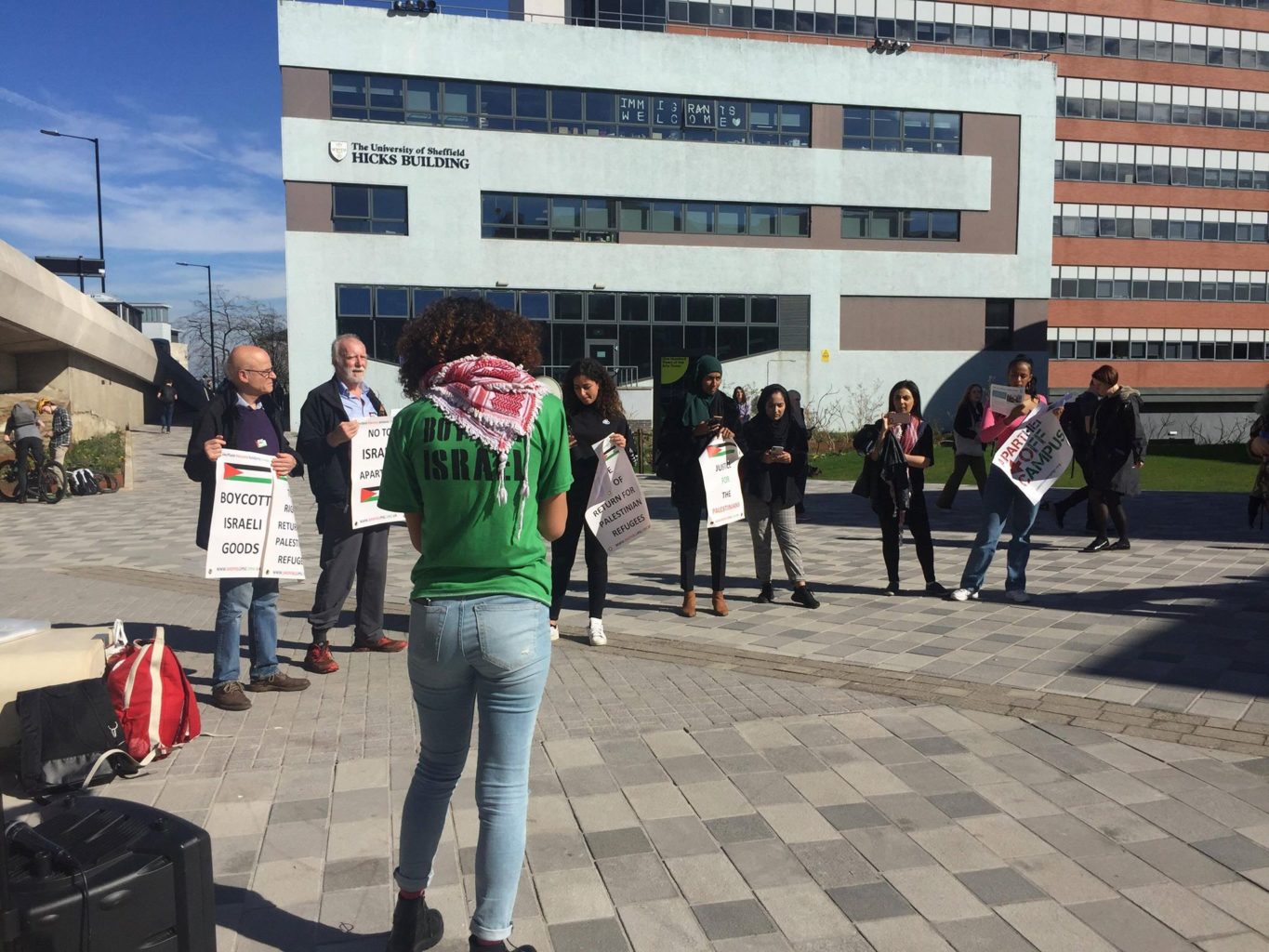 1:00pm
Lancaster students perform a die-in to protest their university’s investments in BAE systems and HSBC. They’re calling for #ApartheidOffCampus ! 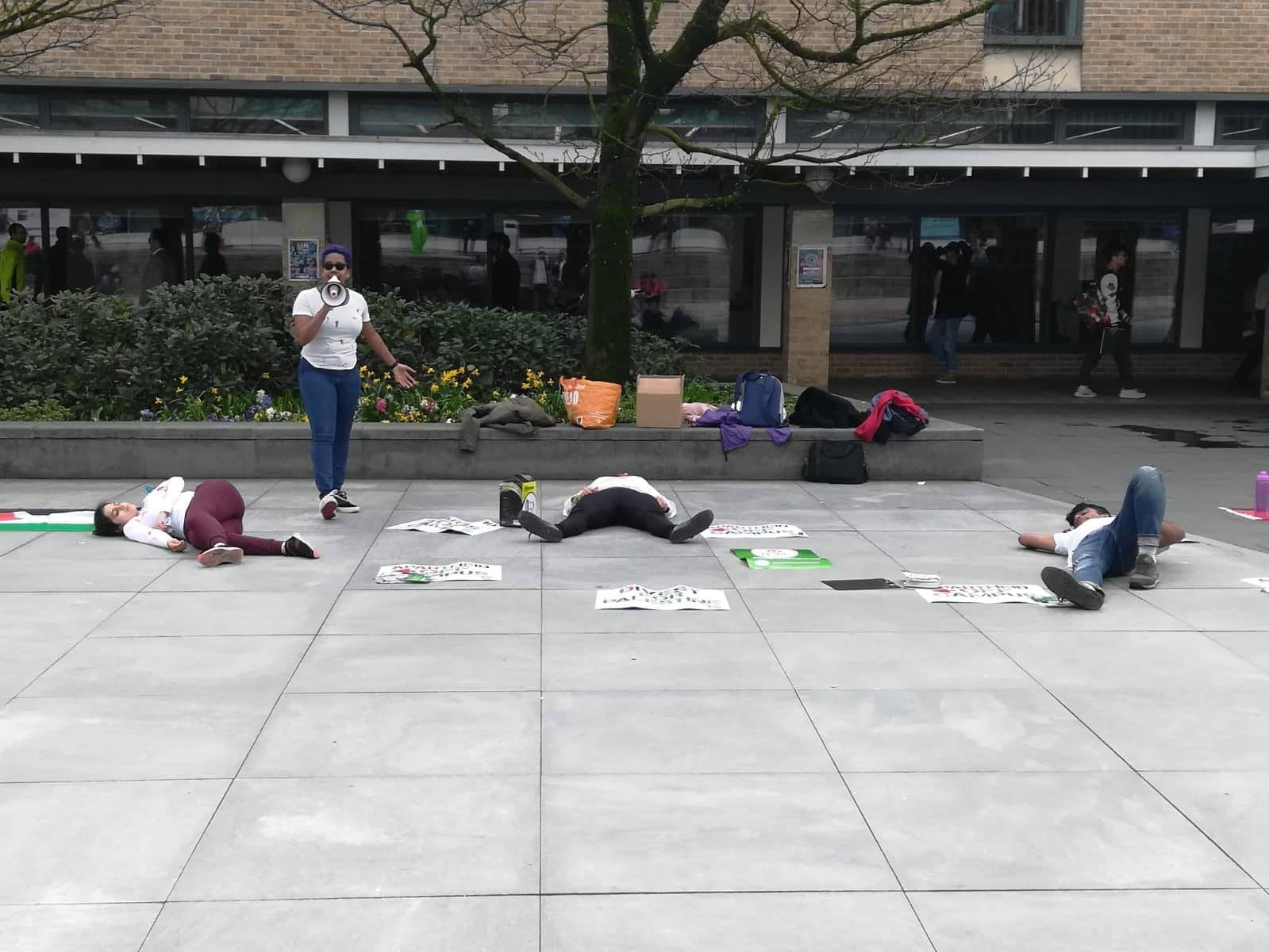 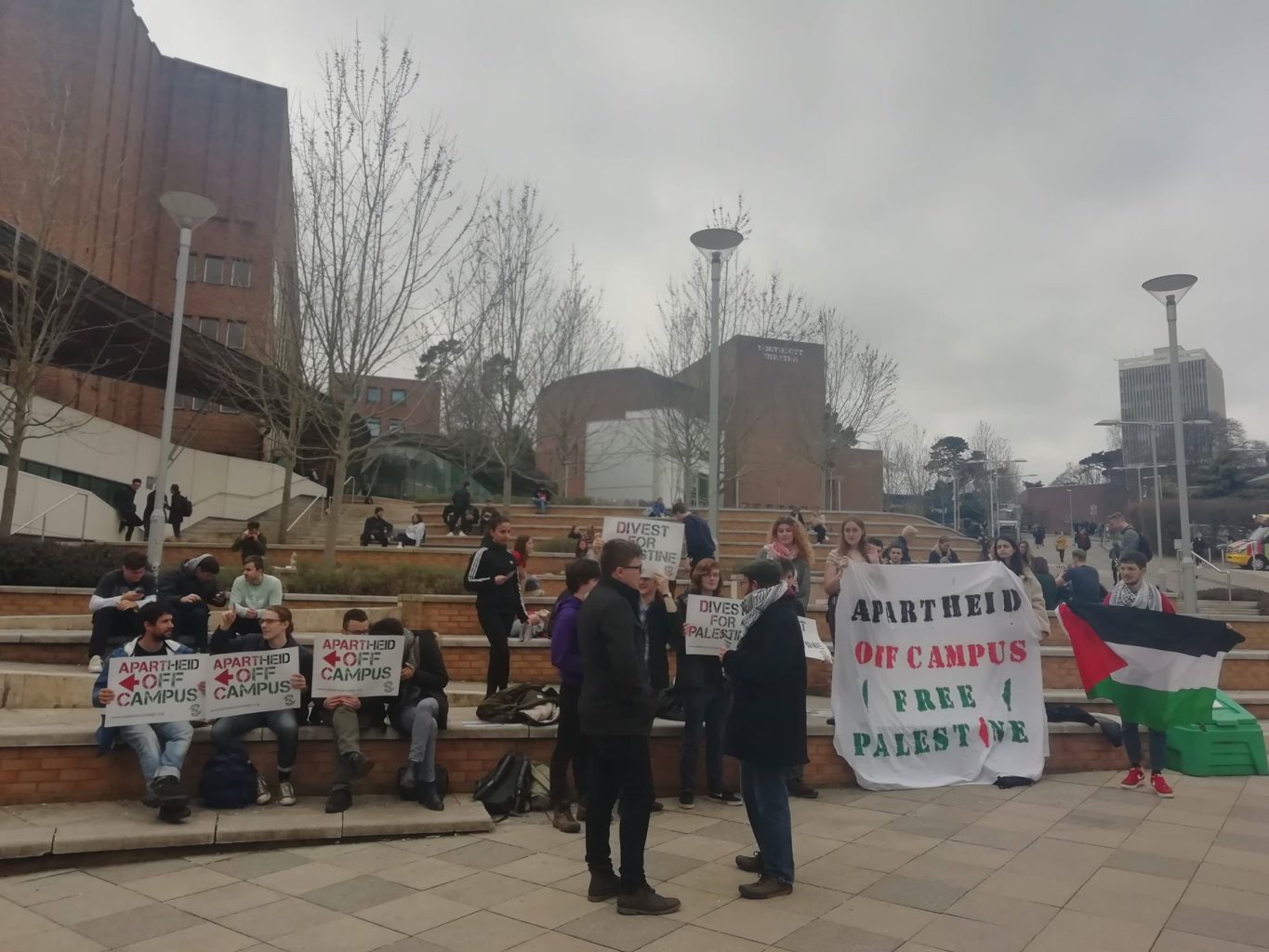 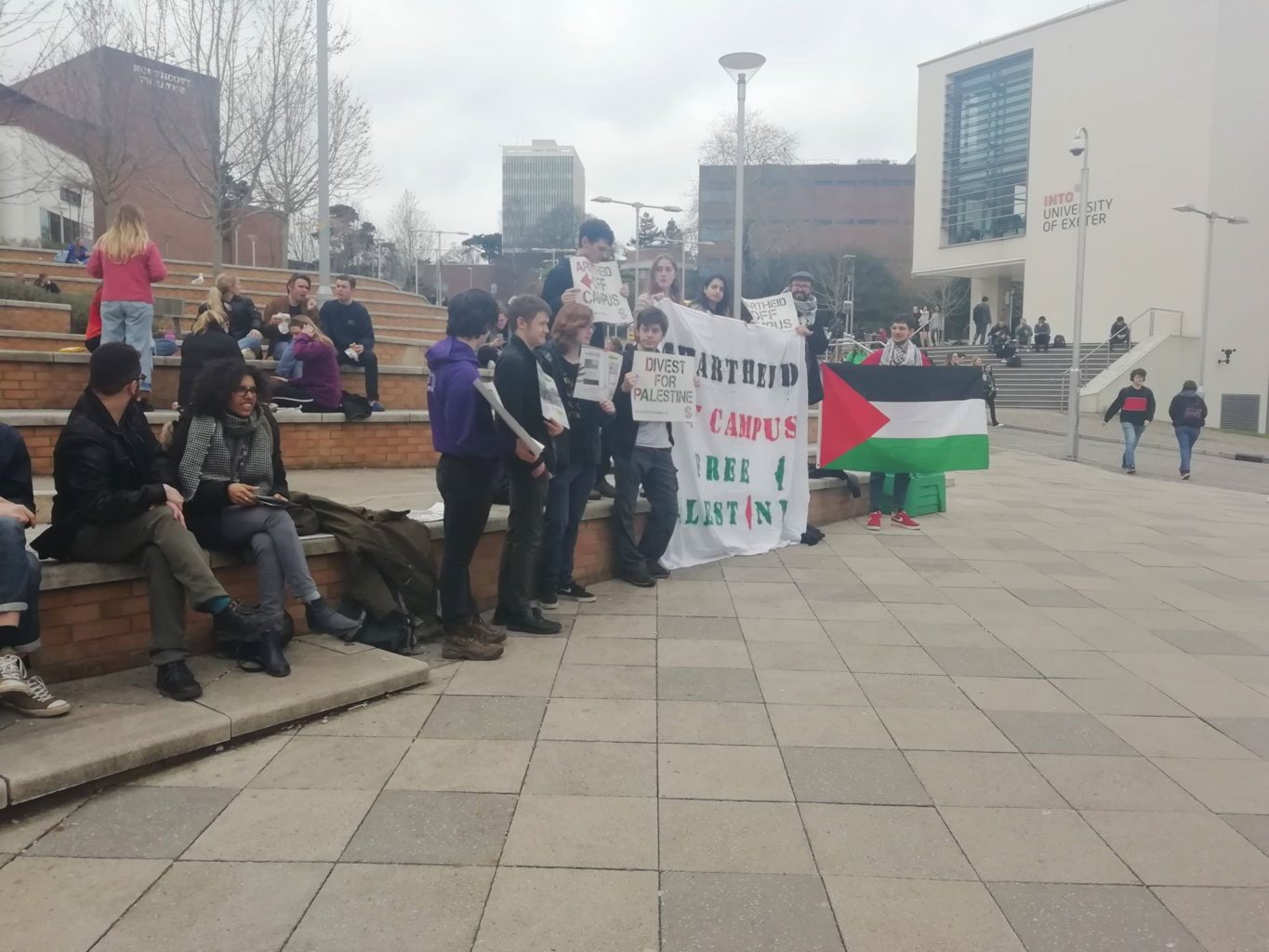 12:15pm
Students at University of Nottingham held a creative protest to raise awareness of the situation in Palestine and to protest their university’s investments in Israeli apartheid 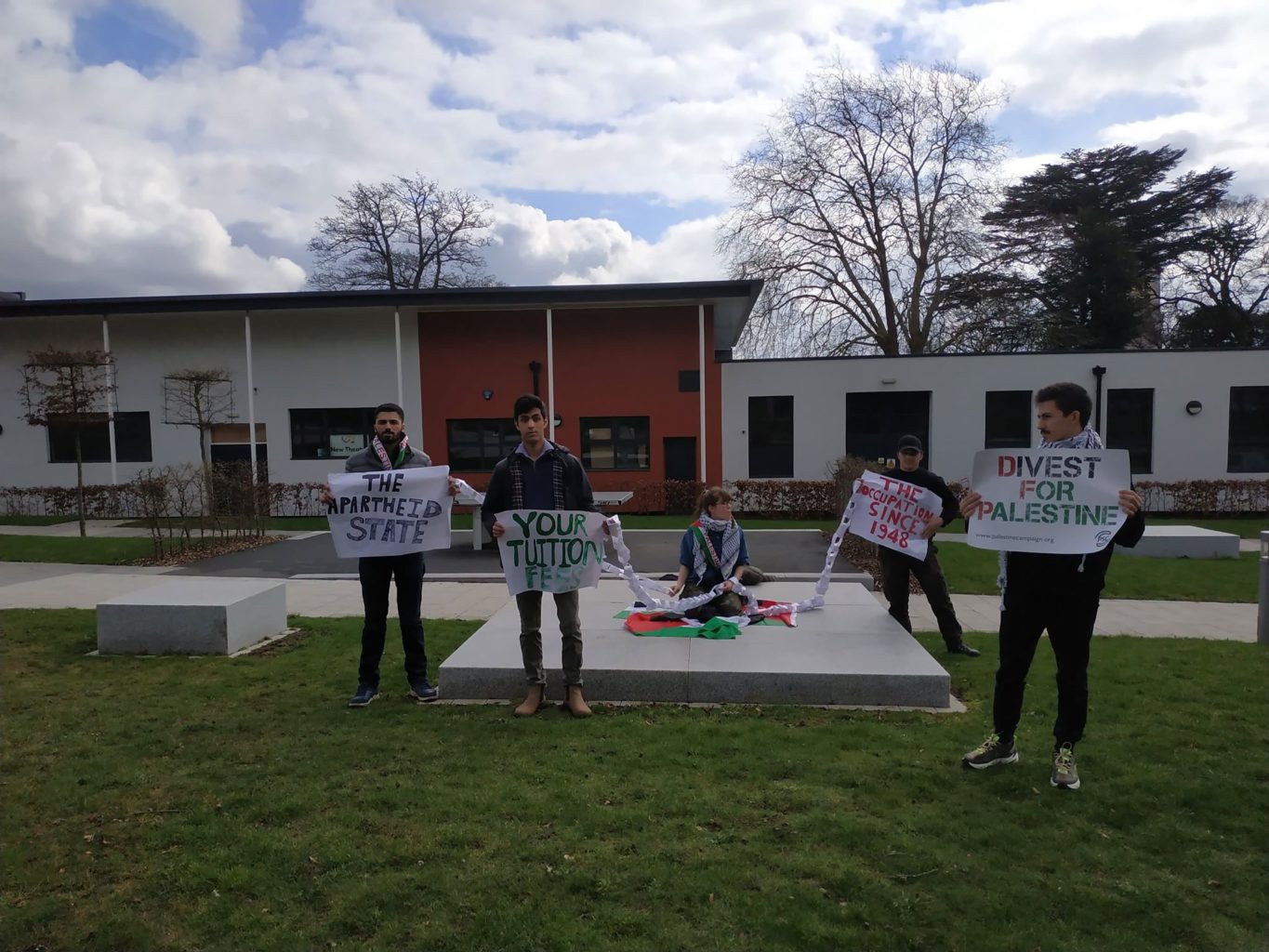 12:00pm
Wolverhampton students have been postering and holding a demo at their SU! They’ll be hosting a meeting later on to discuss how to build their #ApartheidOffCampus campaign! 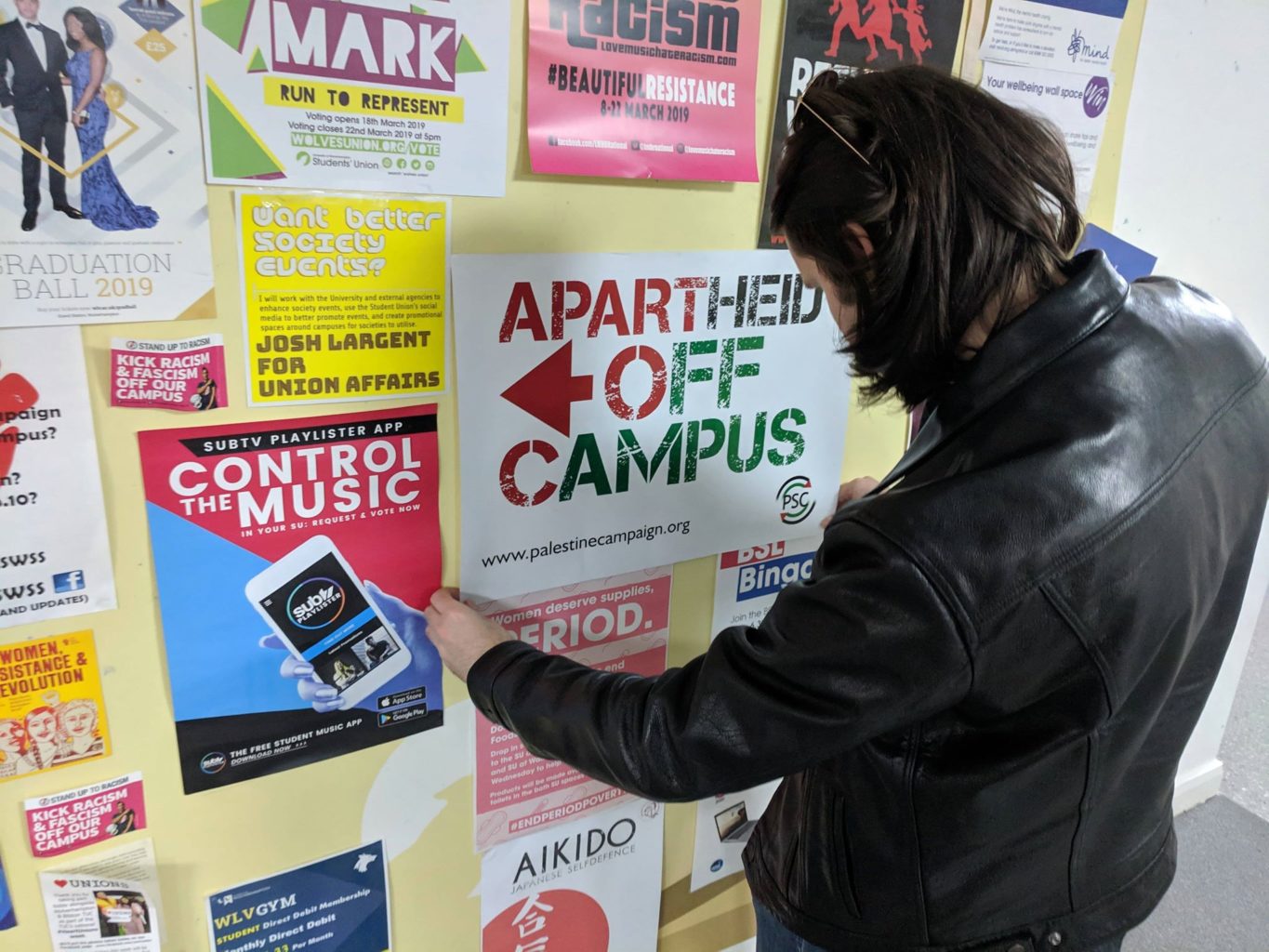 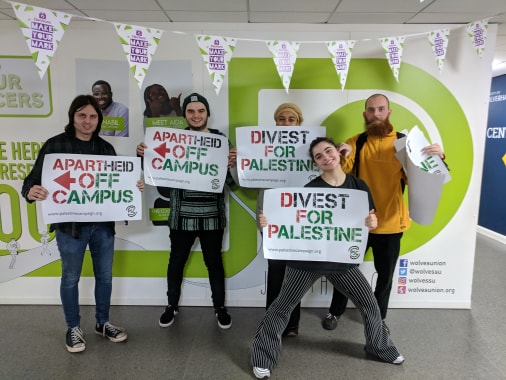 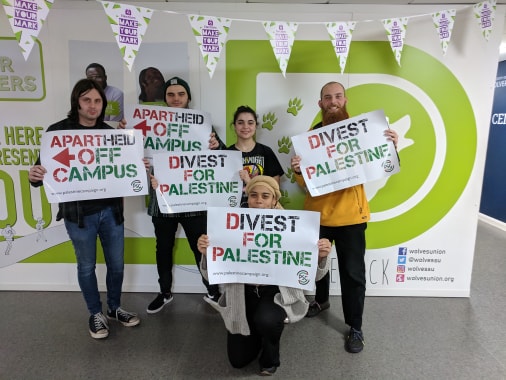 11:30am
Students at Leeds university have began their day of action with a mock apartheid wall and checkpoint, building their campaign for #ApartheidOffCampus! 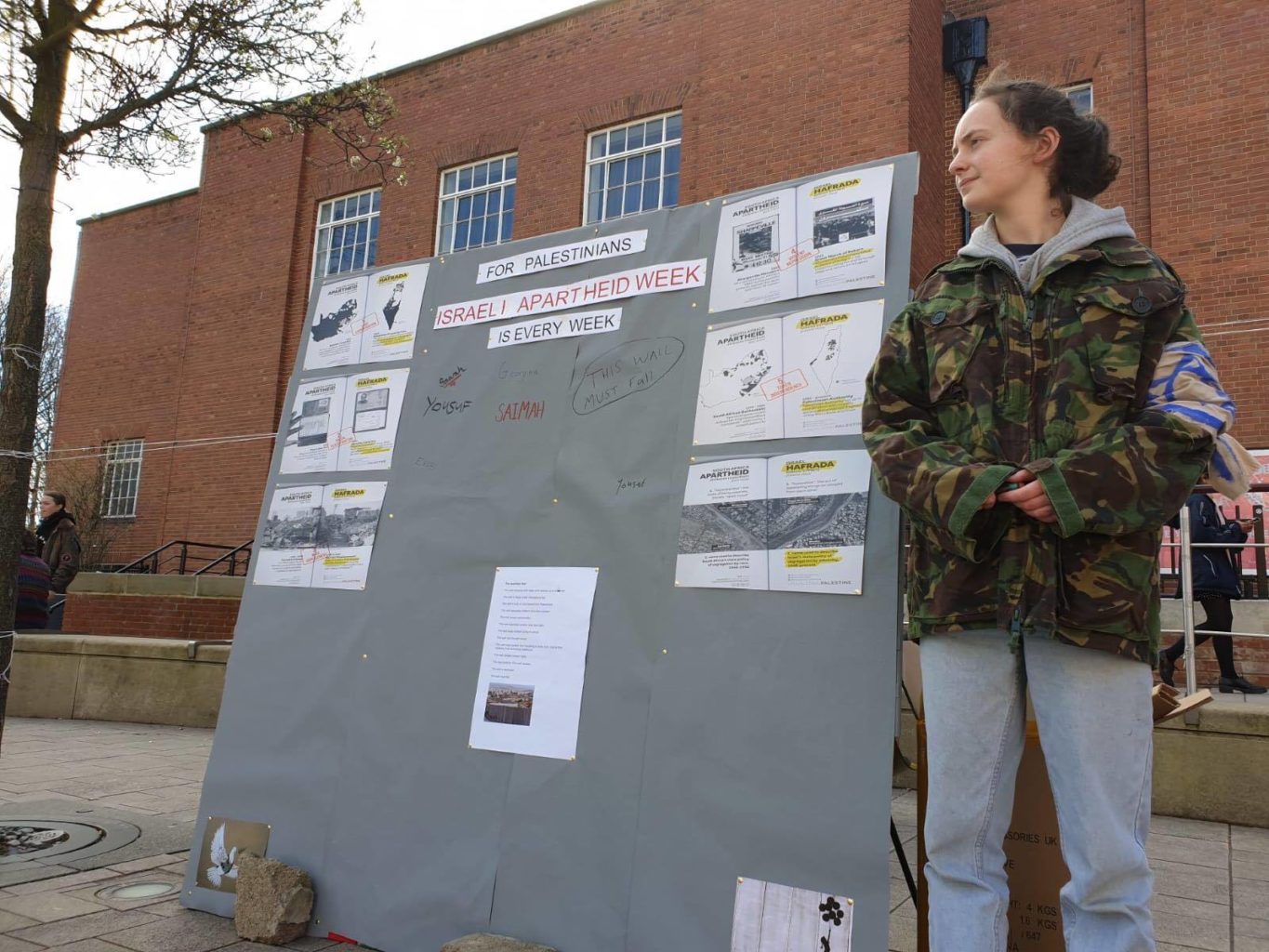 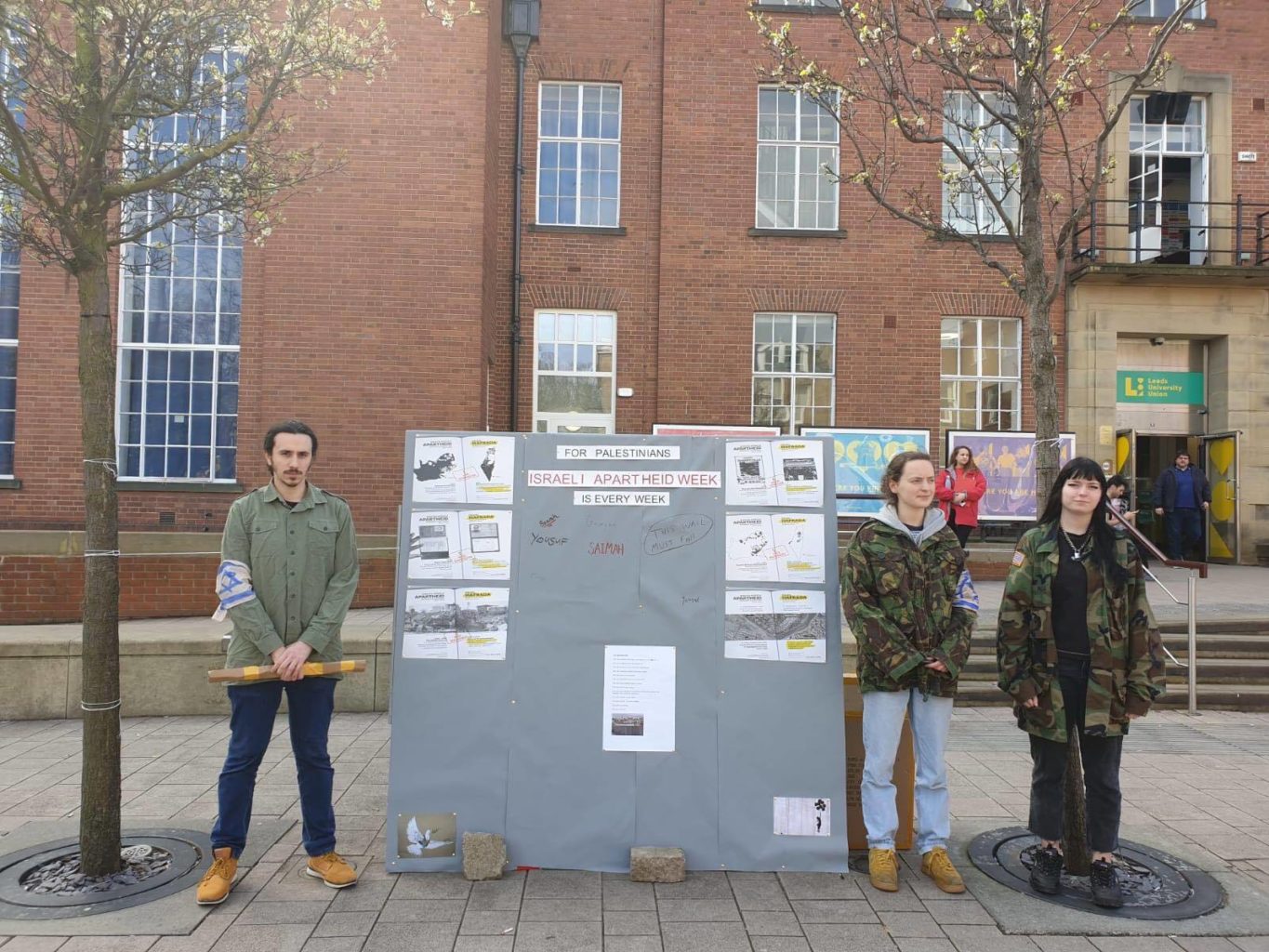 11:15am
Sussex students have now got their mock apartheid wall up! And they are flyering students to build momentum for their divestment campaign to get #ApartheidOffCampus

11:00am
Students at Keele University have set up an interactive creative stall on their campus with an “apartheid quiz” to raise crucial awareness and get students engaged in their #ApartheidOffCampus campaign! 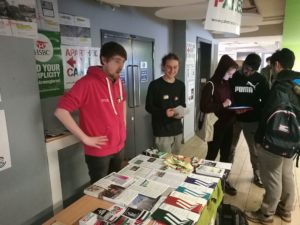 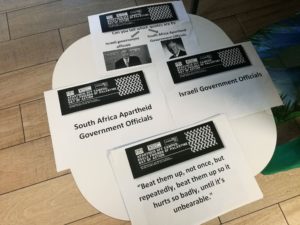 9:30am
Loughborough People and Planet Society have kicked off their day by putting up banners all over campus! #ApartheidOffCampus 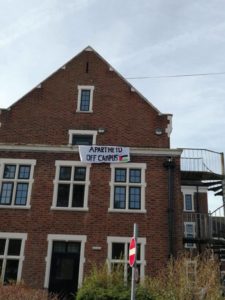 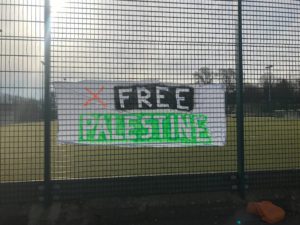 8:30am
Students at Sussex University are busy preparing and transporting their mock apartheid wall to central campus! More to come from them soon…

Context: UK universities remain deeply complicit with Israel’s apartheid regime through their investment and institutional links, despite many holding “social responsibility policies”. These policies often include restrictions on investing in companies who conduct business which leads to human rights violations. One example includes the University of Glasgow, who invest over £17 million worth of shares in companies arming Israel. This includes investments in Caterpillar, who supply armoured bulldozers for the Israeli army, used to demolish Palestinian homes, schools olive groves and communities.