There was standing room only at all Palestine fringes at Labour Party Conference. Events by Palestine Solidarity Campaign, Medical Aid for Palestinians and Labour Friends of Palestine and the Middle East were all packed out. Overall, there were more than 1,000 attendances combined at the events.

We also had a stand at Labour Party Conference> 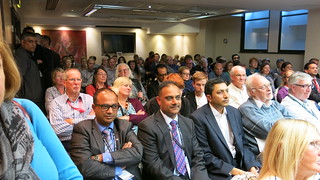 Chi Onwurah MP – who had just returned from Palestine that day – said “I don’t think anything can prepare you for seeing the separation wall & the poverty beyond it.” 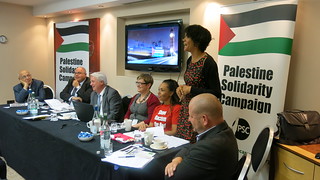 Here are a selection of tweets about the fringe meeting:

Chi Onwurah MP at @PSCupdates meeting: Palestine has tugged at the strings of my conscience for many years now pic.twitter.com/5YrynWYvnA — sarah colborne (@sncolborne) September 21, 2014

Richard Howitt MEP at @PSCupdates #Lab14: can be no return to status quo on Gaza – ceasefire terms should be implemented — sarah colborne (@sncolborne) September 21, 2014

‘We live in a country that is disappearing’ Nabil Sha’ath @PSCupdates #Lab14 meeting — PSC (@PSCupdates) September 21, 2014

Nikki Sharpe from @GMBCampaigns : when arrested by Israel, Palestinian children disappear for days at a time with no news #Lab14

At #LPC14 @PSCupdates fringe now: Simon Weller from rail union ASLEF – I want our reps to go to Palestine and show solidarity