On 17th July 2014, The Jewish Chronicle published an online story on its homepage headlined Pro-Palestinian group says its supporters made antisemitic comments

This was a completely false headline, and attributed comments to Palestine Solidarity Campaign’s Director, Sarah Colborne, which were never made.

The report also began falsely, with this introductory paragraph: ‘The Palestine Solidarity Campaign has acknowledged that its supporters made antisemitic comments during protests against the Gaza conflict’

PSC made an immediate complaint to the Press Complaints Commission (PCC) and informed the journalist who wrote the article. The article was subsequently removed from the JC’s website.

PSC has since been following the PCC procedure, as the JC defended the article and PSC had to respond. Eventually, with the arbitration of the PCC, the JC agreed to publish a correction on its website.

The correction was published today, 23rd October, and is as follows:

‘In an article published on July 17 headlined ‘Pro-Palestinian group says its supporters made antisemitic comments’, we stated that the Director of the Palestine Solidarity Campaign, Sarah Colborne, had said that demonstrations against the Gaza conflict “had been used by people to ‘peddle hatred and intolerance’ towards Jews”. Ms Colborne had not said that. In fact, what she had said was: “The Palestine Solidarity Campaign opposes all forms of racism, including anti-Semitism and Islamophobia, and racism directed against Palestinians whether living in the West Bank and Jerusalem, or as citizens of Israel.” We are happy to set the record straight.’ 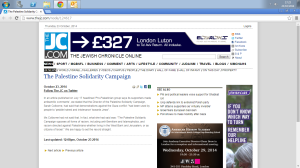 The JC’s agreement with the PCC was that the correction would be highlighted on its homepage, and be available to view for two days and two nights.

“When the Jewish Chronicle published this story, Israel was at the height of its massacre in Gaza, with the ground invasion imminent. Public opinion in this country was one of absolute horror and outrage, and thousands were mobilising in towns and cities everywhere in opposition to Israel’s assault. PSC was at the forefront of that mobilisation, with many thousands responding to our calls to protest in front of the Israeli embassy in London, and one of a series of massive national demonstrations being planned.

“We were quick to challenge this irresponsible piece of journalism through the Press Complaints Commission, and are happy with the result. PSC and other organisations supporting the cause of justice and freedom for Palestinians must be able to do so without fear of smear and slander.”