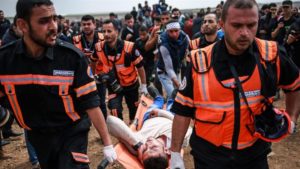 At least 15 Palestinians have been killed and more than 1,400 others wounded by Israeli forces as thousands marched near Gaza’s border with Israel in a major demonstration marking the 42nd anniversary of Land Day.

Israeli forces fired live ammunition at protesters and used tear gas to push them back from a heavily fortified fence, according to the Palestinian Ministry of Health.

Adalah, a legal centre for Palestinian rights in Israel, condemned the Israeli army’s use of force and stated:

“Live gunfire on unarmed civilians constitutes a brutal violation of the international legal obligation to distinguish between civilians and combatants.”

Today’s demonstration commemorates Land Day, which marks the day – March 30, 1976 – when six unarmed Palestinian citizens of Israel were killed by Israeli forces during protests against the Israeli government’s decision to expropriate massive tracts of Palestinian land.

Join us in writing to the Foreign Office, and demand action is taken to hold Israel accountable for its actions!

Have your voice heard and get the Government to take action.