Home / Interview with Sundus al-Azza: Under Attack from Settlers

Interview with Sundus al-Azza: Under Attack from Settlers

Under Attack from Settlers 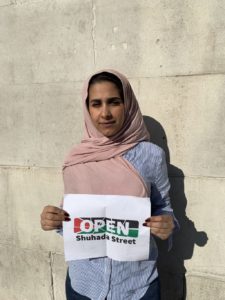 The settlers came on Christmas Eve to attack the volunteers gathered at the Youth Against Settlements community centre on the Tel Rumeida hill overlooking Shuhada Street in Hebron.“The settlers often attack us but that was the worst one,  it was really bad,” Sundus al-Azza told me on a recent visit to the UK.

There were about 15 from the Hebron community of illegal Israeli settlers, who are notoriously among the most fanatical and aggressive in the West Bank. By the time Israeli soldiers and police arrived to intervene, around ten YAS volunteers had to go to hospital.

“It is impossible for us to fight back. Palestinians are always considered guilty. And, anyway, we don’t want to use violence against anybody,” said Sundus. “We filmed the attack. We can’t do anything else.”

Life for Palestinians living in the H2 area of Hebron – the part of the divided city that is under Israeli military and civil control – has become more dangerous since the Israeli government announced the expulsion of the observer force, Temporary International Presence in Hebron (TIPH), in January.

TIPH was launched in 1997 by Italy, Denmark, Sweden, Switzerland, Turkey and Norway at the request of the UN Security Council and agreed upon by the Palestine Liberation Organisation and Israel.

It was set up in the wake of the massacre of worshippers in Hebron’s Ibrahimi mosque by the American settler, Baruch Goldstein, who killed 29 people in 1994. In the aftermath, the Israeli occupation forces closed down most of the Palestinian businesses in the old city area of Hebron and erected around 100 barriers and checkpoints that severely restrict the movements of Palestinians, while settlers are allowed to roam freely, carrying guns.

In December TIPH produced a thorough report on 20 years of observation in Hebron which documented 40,000 incidents of human rights abuses and said that Israel regularly and seriously violated both its own laws and international law.

When TIPH was expelled, the World Council of Churches which runs the Ecumenical Accompaniment Programme in Palestine and Israel (EAPPI), also withdrew its team from Hebron because of security concerns.

“Now that there are no international witnesses in the area we feel afraid of the settlers,” said Sundus. “We try to protect ourselves with cameras.”

Members of YAS took on the role vacated by EAPPI of accompanying children going to school on Shuhada Street to protect them from harassment by settlers. On the day they began, wearing blue vests saying “observer,” they were attacked by settlers who slapped and kicked them under the eyes of Israeli soldiers.

“The settlers control the police,” said Sundus. “For instance, one day my brother was doing running training in the street when a group of settlers tried to attack him. I was filming it on my phone when a settler woman started swearing at me and attacked me.

“I kept filming and she left but then her husband came and hit me in the head. I fell down and he threw my phone on the ground. Then the settlers told the police to arrest my brother, which they did.

“My brother was held for four hours. I went to the police station to file a complaint but the police didn’t ask me anything about what happened, they only listened to the settlers. All the attacks, all the complaints we file, the police do nothing.”

Sundus, 25, who volunteers with YAS, is from one of the 80 or so Palestinian families who are steadfastly clinging to their lives and properties in H2 to protect them from takeover, despite the enormous and relentless pressure from aggressive settlers.

Her family home is 10 metres from the settlement on Tel Rumeida – one of four settlements in the old city which house around 800 settlers. Hebron is the only place in the Occupied Palestinian Territories where settlers live in the heart of a Palestinian community.

She is the niece of Hashem al-Azza whose home was a renowned centre of resistance to settler encroachment and came under regular violent attack as a result. Hashem died aged 54 in 2015 after inhaling tear gas fired by the occupation forces but he remains an inspiration to Sundus.

When Sundus’ brother, Yusuf, was ten in 2005, he was attacked by a settler woman who pushed a stone into his mouth and crushed his teeth. These and many other incidents had a huge effect on Sundus’ childhood but she is now working and studying to teach English.

“The settlers do disgusting things to us. They throw a lot of stones, vegetables, eggs, dirty water and even buckets of sewage,” she said.

The worst times she has been through were from the last quarter of 2015 to the first half of 2016 when there was a sharp rise in violent clashes. “The Israelis killed more than 15 Palestinians in Tel Rumeida,” she said.

“I heard shots many, many times and smelled the tear gas, really strong. This really affected me badly.

“For a time I wanted to leave the area, but when I thought about it, I saw that they were doing these things to force us to leave our houses. That is what they want. That made me change and stay in my house because I wont do anything that Israeli settlers want. But it is a very difficult life.”

Sundus was in the UK to give talks about her experience of life under attack from settlers but also to encourage the international community not to forget Hebron.

“It is really important for internationals to continue to come to Hebron. I don’t want people just to hear about the situation from me; come and see for yourselves.”