How Israel exerts its influence on the BBC

In the early hours of 12th November, around two dozen Israeli gunmen, one disguised as a pregnant Palestinian woman, others wearing fake beards, invaded a hospital in Hebron and gunned down a 28-year-old man.

In a rare burst of reporting on an Israeli atrocity, the BBC ran an article on its website headlined: “Israelis shoot dead Palestinian in Hebron hospital raid”.

It was a straightforward headline which summed up the story. But later in the day, a changed headline appeared above the article.

As is standard practice for the BBC, the amendment was not noted at the bottom of the page, so newcomers to the article would not have known the headline had been altered.

It was spotted, however, by the media-watch organisation, Media Lens, which posted a screengrab of the two headlines, before and after, on its Facebook page, along with the questions: “What happened? Pro-Israeli flak? Bending to pro-Israeli pressure?” 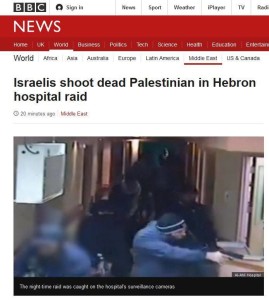 And after it was changed: 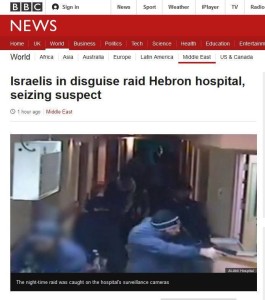 These are reasonable questions to ask because it goes completely against the grain of good journalism to divert audiences from the horror of a man being killed inside a hospital by armed forces, and shift their focus onto something comparatively far tamer – in this case, the “seizing” of a patient.

The questions become even more pertinent in the light of a documented exchange which took place between the BBC, the Israeli government press office and the Israeli embassy in London at the beginning of October about another BBC headline.

The Times of Israel reported then on Israeli fury sparked by a BBC Online headline of 4th October which read: “Palestinian shot dead after Jerusalem attack kills two”.

The Times of Israel wrote: “The [Israeli] Government Press Office on Sunday warned the BBC it could face sanctions for running a news headline highlighting the death of the Palestinian terrorist shot by the police Saturday after fatally stabbing two Israelis, rather than the attack itself.”

Additionally, “the Israeli Embassy in London asked the network to change the headline”.

Whatever the GPO’s harsh words were, they appear to have been enough to scare the BBC into changing the headline, which went through three alterations – documented by the Zionist lobby Group, BBC Watch – before it met with the satisfaction of the Israeli embassy and the Israeli GPO.

The Israeli-approved headline ran: “Jerusalem: Palestinian kills two Israelis in Old City”. (This headline has since been changed again, apparently unnoticed by either the Israeli embassy or the GPO, to “Israelis killed in Jerusalem, Palestinians banned from Old City”.)

In its report of 4th October, The Times of Israel noted: “According to a GPO official, Israel expects an official apology from the network, and said the office was considering annulling the press cards of BBC journalists, a decision that if implemented would not allow the network to continue operating in Israel.”

This is not an idle threat from the Israelis, and staff at the BBC know it.

In 2003, the Israeli government severed ties with the corporation, accusing it of the “worst of Nazi propaganda”, after it broadcast a documentary – Israel’s Secret Weapon – which shed light on the country’s nuclear and chemical arsenal.

In his “Nazi propaganda” attack on the BBC, Danny Seaman, then head of the Israeli GPO, added: “There was a decision by the state of Israel to cut off all contacts with the BBC because of what we feel to be a bias and an anti-Israel line apparent in a series of programmes that portray Israel in a very evil light.”

Seaman said government officials would no longer help BBC journalists get quick press accreditation, bypass red tape to get work visas or get through army roadblocks in Palestinian areas. And the Israeli government, he added would continue its policy of non-cooperation, until the BBC behaved in what Israel considered to be a “professional and balanced manner”.

When Orla Guerin, then a BBC Middle East correspondent, questioned Israel’s repressive attitude towards the corporation, she, too, found herself in the Israeli government’s line of fire.

In an interview with the London Evening Standard in 2003, she said: “I can’t imagine any other government thinking like that – Zimbabwe is the comparison. I’m absolutely stunned that they think it’s appropriate…How can you still be a democracy and try to harass the press? This is not how a democracy behaves.”

The following year, after she fronted a report about a would-be suicide bomber, the Israeli government wrote to the BBC accusing Guerin of a “deep-seated bias against Israel” which, the Israelis said, was “verging on anti-Semitism”.

Guerin was later pulled from the Middle East, the decision being announced just days after the BBC’s then Director General, Mark Thompson, returned from a visit to Israel in 2005 where he met with then Prime Minister, Ariel Sharon.

Journalist Keith Dovkants, writing in the London Evening Standard in 2012, notes that, “on [Thompson’s] return to London the corporation instituted the Middle East reporting regime that exists today and which, many believe, influenced the decision to refuse to show the charity aid appeal for Gaza.”

This is a reference to the DEC appeal of January 2009, which was aired by major television channels to raise money for Gaza as another Israeli massacre there came to an end, but which, in an unprecedented move, the BBC refused to show.

At the beginning of August 2014, a month into Israel’s two month Gaza assault of that year, the BBC agreed to broadcast a DEC appeal – after admitting that Israel had approved the move.

Speaking on BBC Radio 4’s Today programme on 7 August, 2014, the BBC’s media and arts correspondent, David Sillito, said the BBC felt able to show the appeal because: “Israel has said there is a humanitarian crisis…so it feels as though the issue of impartiality has come to an end. There is no issue of compromising impartiality.”

Presenter Sarah Montague asked him: “So, it’s because of Israel’s admission that it’s a humanitarian crisis?”

To which Sillito replied: “It seems to have been a key part of it.”

BBC in a ‘white funk’

It’s clear, then, that the BBC is put under great pressure from the Israeli government and its embassy in London to report on Israel in the best possible light – pressure which its seems unable to withstand.

Greg Philo, director of the Glasgow Media Group, examined this pressure and the distorted journalism it produces, in his book More Bad News from Israel, co-authored with Mike Berry.

The book quotes a BBC news editor, who told the authors that, when journalists put out a report about Israel and Palestine: “We wait in fear for the phone call from the Israelis.”

They know the call will come, adds the news editor, the only issue is how high up from the Israeli side will it come from, and how high up the BBC will it go? Will it go to the director-general, the Trust, the chair of the BBC?

Arthur Neslen, a journalist who worked at the BBC for four years, told me: “They take Israeli calls very seriously, and critical stories about Israel get shot down through official pressure and the fear of official pressure. These are very powerful lobbyists — people know their careers can be broken.”

The existence of this fear among BBC journalists is also acknowledged in Dovkants’ 2012 article for the London Evening Standard.

Dovkants writes: “According to sources inside the corporation tensions over Israeli-Palestinian coverage have induced a state of near psychosis among BBC executives and policy-makers. One insider told the Standard: ‘They are in a complete white funk. To describe them as like headless chickens running all over the place would be to convey an impression of too much order and cohesion. They are cowering in corners. The fear is palpable’.”

Dovkants also interviews Swedish academic, Leon Barkho, author of The BBC and the Middle East, in his article.
Barkho tells Dovkants: “I have investigated this and I am convinced the policy is dictated from the top because of the enormous sensitivity…The message is: don’t antagonise the Israelis.”

Barkho adds: “The instructions to journalists are clear. They are: don’t tell it like it is, tell it the way we tell you to tell it. That is not a policy that fosters impartiality, it is biased from the very start.”

And so the questions asked by Media Lens when the BBC downgrades a headline to soften public perception of an Israeli crime – “What happened? Pro-Israeli flak? Bending to pro-Israeli pressure?” – answer themselves.

It is a sad state of affairs for a news organization which likes to think of itself as a leader in global journalism. As journalists living under oppressive regimes across the world risk their lives, and sometimes give their lives, to expose the crimes of their governments, BBC journalists and editors, it would seem, sit at their desks in London and cower in fear at the thought of an angry phone call from the Israeli embassy

They let us all down, but, most of all, they let down the Palestinian people whose cry for freedom goes unheard at BBC Broadcasting House, drowned out by the undemocratic machinations of the Israeli PR machine.

This article, by Amena Saleem, first appeared in shorter form on the Electronic Intifada<