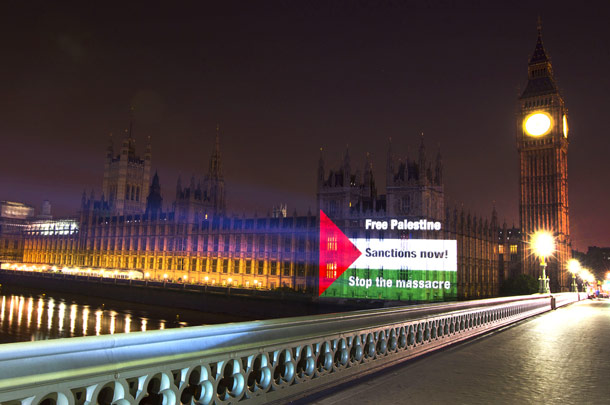 On Friday 1 August 2014 Palestine Solidarity Campaign projected the flag of Palestine onto the Houses of Parliament. The projected image calls for an end to the massacre in Gaza, and a call for sanctions against Israel.

“It is an outrage that the British Government is standing by whilst Israel slaughters Palestinians. The Prime Minister, David Cameron has failed to listen to the voices of hundreds and thousands of British people who have taken to the streets. He has failed to stand up for an occupied people being ruthlessly murdered by an occupying power.

The Prime Minister has weakly accepted the US’ political position, which is totally out-of-step with the mood of this country. It is time for firm action consistent with international law. David Cameron must:

Demand an end the massacre in Gaza

Implement an immediate and total arms embargo on Israel

People are really angry that this injustice is continuing despite our ability as a nation to pressure Israel to end the attacks. The Government must not delay in responding to the moral and public demands it faces.”

notes for the editor