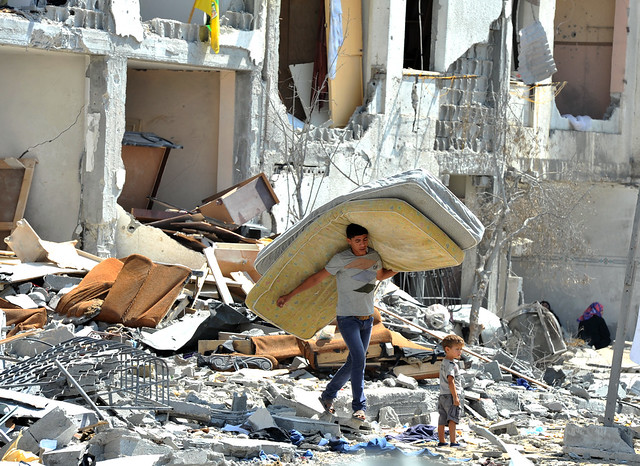 My name is Hayat.

Johr Al-Deek is an area that many have not heard of. It is somewhere between Gaza City and outlying camps. This village, with its farms, houses and people was attacked on a near-daily basis by Israeli forces even before the assault of 2014.

Its population has become used to such acts, since it is a border zone.

But the residents of Johr Al-Deek continue to re-live the horrors of the trauma of the 2014 war on Gaza. They thought they were simply experiencing a nightmare they refused to believe in.

How could this happen to their houses that stood high before the assault, only to be destroyed into the ground by the Israeli occupation war machine?

The entire village was wiped off the map of the Gaza Strip.

During Israel’s assault, in Johr Al-Deek, around 1000 houses were damaged, including 570 entirely destroyed. Hundreds of farmers lost their land and crops. The shelling claimed the lives of dozens of the village’s residents.

Abu Mohammad, a resident of Johr Al-Deek, recalled the attacks, while his face showed traits of resilience and perseverance, in spite of the suffering of being displaced, which he and his family endured. Such suffering is unimaginable.

He reported that during Ramadan in 2014, “We sat around the dinner table to break our fasts when suddenly we heard the sounds of explosions. I tried to calm down my children.”

He added, “A friend called to check on me and my family after he had heard that a friend’s house was shelled. The only thing that came to my mind was my brother’s house, which was not far from this bombardment.”

“I quickly left to see find out what had happened, leaving my family and children crying out that I should not leave them alone and go to such a dangerous spot”. An expression of grief overcame him.

He said, “I arrived and found that a friend’s house was shelled, with its residents still inside. We started looking for the injured as rounds were fired at us from Israeli tanks. We had pulled out one person from the rubble before we had to leave without evacuating the dead.”

“The ambulances evacuated us from our neighbourhood and left us in an UNRWA school used as a shelter. There, we experienced the agony of homelessness.”

In another corner sat Abu Taher recalling the atrocities of those days.

He said, “The memories of my children’s childhood, all those happy moments; everything that belonged to me, all the hard work over a lifetime; all of this was buried under the bulldozers of the occupation, just in a few seconds.”

“No mercy was taken. I returned to what used to be a grand house to find only rubble. I looked around and was shocked by the scene. It was like a devastating earthquake had occurred.”