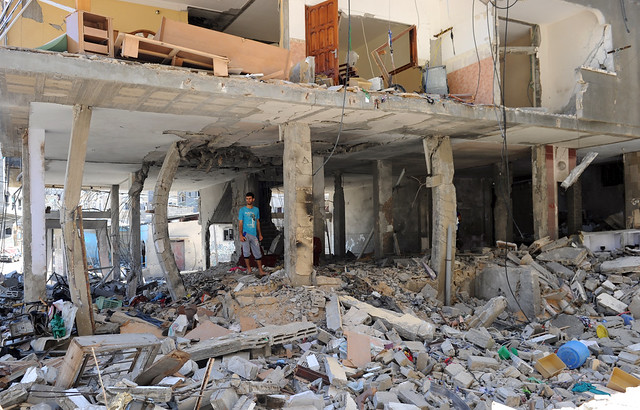 My name is Abdelrahman.

On the 22nd night of Ramadan this year, I was sitting in a Gaza neighborhood that was completely in the dark because of power shortages.

As I listened to music on my phone, I recalled the years gone by, one after the other.  I remembered what happened in Ramadan in each one of those years.

Those memories added a touch of beauty to the past and hope for the future.

That was until I got to that Ramadan of bitter memories, the toughest Ramadan of all, Ramadan of 2014. That was a sad month when the Musaher (the man who wakes people up to take their pre-dawn fasting meal) was silenced as the minarets bowed in mourning.

There was no electricity at all. The scene was only noises of bombs and missiles with blood flooding on the lands of the Gaza Strip.

It was one of the worst days of the war on the Gaza Strip; it was this assault during which the Israeli occupation committed a ferocious massacre against unarmed civilians in Shuja’iyya neigborhood.

In this single night, at least 74 people were killed, 250 were injured.

It was one of those violent nights in the Gaza Strip with arbitrary shelling targeting children and seniors, killing entire families, wiped out without a trace.

I sat remembering the massacres committed against Palestinian families.

As that sad memory filled the room, I became overcome and left, to wander around Shuja’iyya neighborhood, to see what, if anything had been reconstructed since Israel’s assault.

Very soon, I saw the wreckage of the house of Skafi family. 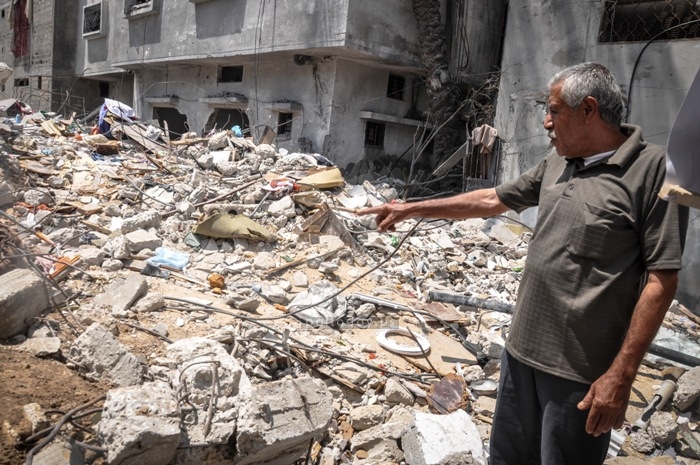 Israeli forces committed a massacre against this family that broke my heart and caused an outpouring of tears of grief.

I continued my walk until I was 100m from the demolished house, where I saw some of the survivors of the family sitting to commemorate the death of their relatives.

They accepted condolences from the people gathered there and with great sadness, sang to honour the dead. I wanted to find out the rest of the story.

I met Omar Skafi, who told me what had happened. I was lost in imagining the scene of this massacre, shifting between my own memories and Omar’s description of this crime.

Omar Skafi began his story by describing his family: his father, mother and twelve other male and female members. Then he began to talk about the massacre.

He said, at that time, the shelling was arbitrary and overwhelming. It comprised all military means and weapons, with artillery, planes and internationally-banned bombs.

Omar explained, “We fled to a nearby house. In that house gathered 150 members of the family. There were women, children, men and young people. We don’t know exactly what caused the explosion. It was followed by the shattering of stones, glass, doors, and windows and accompanied with thick black smoke. We didn’t recover until a few minutes had passed”.

Omar, who had narrowly escaped death himself, added, “After the smoke and dust faded, we found huge holes in the walls of the house. A few minutes after we left the house, we realized the massacre committed against our family.”

“The situation,” he said, “was devastating. We could not control it. We stood for minutes looking at each other in this painful horrendous scene. Then, we found the martyrs under the rubble. We looked for the twins, Anas and Saad, but could not find them for three days. When we eventually found them their bodies had begun to decay.”

With heavy sadness, he recited the names of the nine people lost to this butchery.

This is my story, this is our story, the story of the devastation we face, the story we cannot forget.

If I can ask for something, I will ask for one thing, a homeland where peace prevails.

A homeland where we can live like the other people of this world.

This is my question. When will I have my answer?

By Abdelrahman and Osama.