Everything is resistance – interview with popular resistance advocate Mazin Qumsiyeh 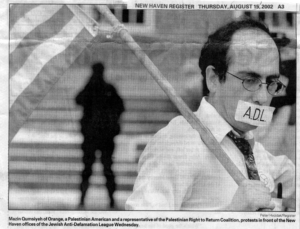 “Everything is resistance,” says Professor Mazin Qumsiyeh, one of the leading voices in the Palestinian movement of popular resistance. “When I drink juice in Palestine, it is resistance because Israel doesn’t want Palestinians living there at all.

“Eating, drinking, getting married, having children, growing your own vegetables, it is all resistance.”

Qumsiyeh is very keen on Palestinians growing their own vegetables; for him it is both a practical and a symbolic activity, expressing the people’s love for and connection with the land and linking resistance to care for the environment. It also provides a psychological benefit.

“Resistance is a form of therapy in any anti-colonial struggle,” he says. “You also have to build sustainable communities, even under occupation.

“How do you make sure you have some form of food security, some system of agriculture, some sort of liveable conditions? I say, build a green wall, a green roof, create a fish pond. This way you don’t have to buy from the Israelis as well.”

Qumsiyeh teaches and does research at Bethlehem and Birzeit Universities. He is the director of the main clinical cytogenetics laboratory and director of the Palestine Museum of Natural History and Institute for Biodiversity Research.

Author of books including “Popular Resistance in Palestine: a History of Hope and Empowerment,” and “Sharing the Land of Canaan,” he was in the UK recently giving a series of talks and forging links with institutions such as the Natural History Museum and the University of Oxford Botanic Garden.

“I want to make collaborations so people give us ideas, training, hosting for our PhD students. This kind of activity can help build our human capacity which by definition aids resistance.

“The Zionists want us ignorant, totally obedient, non-questioning. They want to reduce our status as sub-human beings: they believe God chose them and we, the natives, have no rights, no value. If we resist that we liberate our minds, and then can liberate our bodies. It was a slogan of the civil rights movement in the US: ‘Free your mind and your ass will follow.’”

Qumsiyeh comes from Beit Sahour, the village on the edge of Bethlehem where the shepherds are said to have seen the star announcing the birth of Jesus. Israel has confiscated much of the village’s land to build illegal settlements, particularly the giant concrete sprawl of Har Homa which looms over Beit Sahour and where the Israeli state offers a range of financial inducements to Jews from round the world to buy apartments, many of which stand unoccupied.

The Bethlehem area is home to some 220,000 Palestinians who Qumsiyeh says are now squeezed into only 13% of the district’s land. The population includes 70,000 refugees driven from their homes in 1948 and 1967 and living ever since in three teeming refugee camps.

The other 87% of the district’s land is unavailable for Palestinian development and reserved instead for the Israeli settlers who now number around 150,000.

“We have become very crowded and it makes life very difficult,” says Qumsiyeh. “Every year it gets worse as the population grows. Life will be unliveable in the Bethlehem district in 15 to 20 years, as it is already unliveable in Gaza.”

Social problems among Palestinians are growing. Qumsiyeh says 70% of Palestinian children would be clinically diagnosable with Post Traumatic Stress Syndrome by western standards. In East Jerusalem there is increasing drug addiction, alcoholism and debt problems.

Qumsiyeh rejects a categoric distinction between violent and non-violent resistance, preferring to regard resistance as a curve along which people place themselves according to their own outlook. “I was once arrested by the Israeli occupation forces and charged with being violent because they said I had caused ‘psychological violence’ to a soldier by something I had said.

“Is economic sabotage violent or non-violent? Is throwing stones at a tank violent or is it legitimate resistance to colonisation? I see all forms of resistance as continuous and connected.”

Beit Sahour is famous in the history of Palestinian resistance for refusing to pay taxes 1989, claiming “no taxation without representation.” The Israeli occupation authorities cracked down hard, imposing a 42-day curfew on the village and raiding homes to confiscate property worth over a million dollars.

“I work on people power, not through leaders or politicians,” says Qumsiyeh, who is sceptical about the effectiveness of the recent reconciliation between Hamas and Fatah.

“All the major social changes in history have been achieved through people getting their act together – women’s rights, civil rights in the US, ending the Vietnam war, ending apartheid in South Africa, they all happened because enough people woke up and said: ‘Enough of this, let’s do something.’”

Qumsiyeh does not want the British people to treat Palestine as a “charity case.” What he does want is for people to demand that the British government stops transgressing against its own values by supporting Israel.

“British values are respect for the rule of law, human rights, mutual respect, individual liberty and equality – all are violated by Israel so why support it? Why doesn’t the British government insist that Israel complies with international law, including the UN resolutions that Britain voted for?

“I want the British people to demand that its government does so. If they do what’s right it is win-win for everybody, including Israeli Jews who are also suffering in the present situation.”