A new perspective on Palestine.

Talk with Michael Mansfield QC and his partner Yvette Greenaway, Founders of Silence of Suicide.

Michael Mansfield, the leading human rights lawyer (IRA Bombing trials; Bloody Sunday and Hillsborough inquiries; and many other high profile cases) is an outspoken supporter of Palestinian rights. He recently defended Ken Livingstone against charges of anti-semitism that led to his suspension from the Labour Party. Michael Mansfield founded Silence of Suicide together with his partner Yvette Greenway, shortly after his daughter took her own life. In his talk he will explore the links between personal conflict and political conflict. Both can lead to death whether though suicide or unlawful killing. Both require greater understanding and discourse. 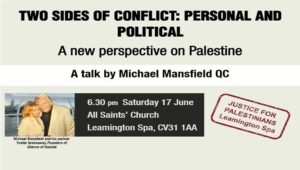 This event is free – although donations will be welcome.

Organised by Justice for Palestinians – Leamington Spa. Soft drinks will be provided.