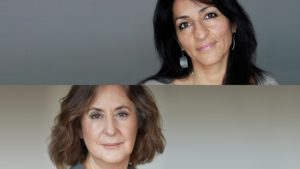 Part of Shubbak Festival at the British Library

Palestinian-American novelist Susan Abulhawa is one of the most commercially successful Arab authors of all time. Her 2010 debut novel Mornings in Jenin, a multigenerational family epic spanning five countries and more than sixty years, looks unflinchingly at the Palestinian question – and became an international bestseller translated into thirty-two languages.

In 2015 The Blue Between Sky and Water, a novel of family, love and loss centred on Gaza, also met a vast global readership and huge critical acclaim from across both the mainstream and literary media. Her powerful, political and romantic fiction is written in English, yet it is deeply rooted in the land and language of her ancestors. Her work has earned her The Leeway Foundation Edna Andrade award for fiction and creative non-fiction, USA Book News Best Books Award for Historic Fiction, MEMO Palestine Book Award and the Barbara Deming Memorial Fund Award and she is the founder of the charity Playgrounds for Palestine.

In this special appearance, Susan Abulhawa is hosted by South Africa born British novelist, playwright and memoirist Gillian Slovo, recipient of the 2013 Golden Pen Award for a lifetime’s distinguished service to literature. Susan Abulhawa will read from her books and discuss her themes and her craft – from the historically specific and the politically engaged to the timeless and the universal.