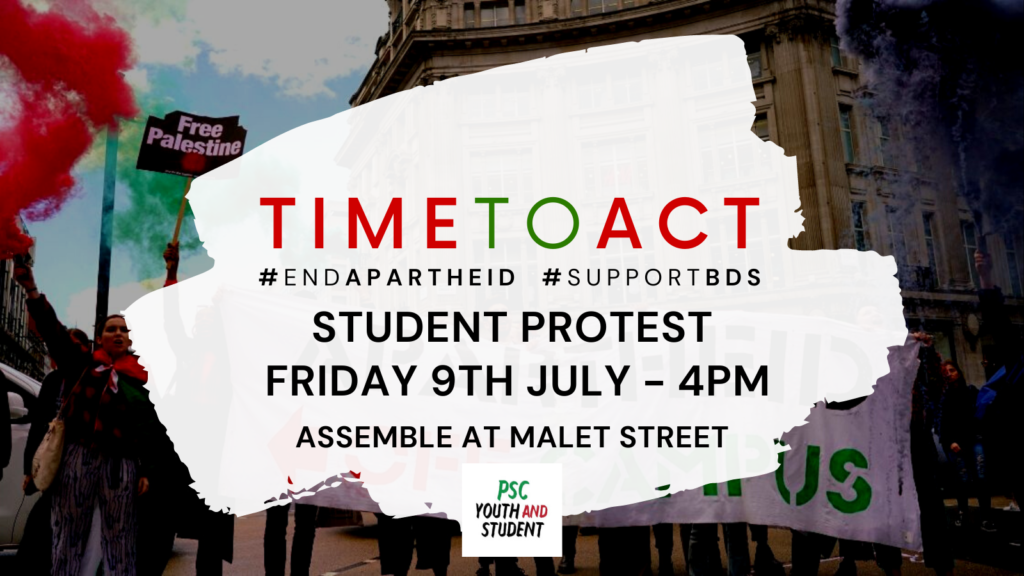 ASSEMBLE MALET STREET // 9TH JULY // 4PM
—
Part of a Student Day of Action on the 16th anniversary of the initial call for BDS! March for an end to all complicity. #EndApartheid #SupportBDS
—
In May 2021 Israel launched another aerial bombardment of besieged Gaza, targeting the majority refugee population in the enclave. The 11 days of relentless bombardment killed at least 248 Palestinians, and injured thousands.
While the bombs may have temporarily stopped falling, Israel’s regime of systematic discrimination against the Palestinian people, amounting to the crime of apartheid under international law, continues.
Israeli apartheid can only be maintained because of the complicity of our government and our institutions. This includes UK universities. UK Universities collectively invest over £400m in companies complicit in Israeli violations of international law.
Along with investments, UK universities maintain partnerships, programmes, and ties with complicit Israeli institutions. For example, a plethora of UK universities have ties to the Technion in Haifa, which functions as the R&D wing of the IDF, developing military technology to be deployed to oppress Palestinians.
On July 9th 2005, Palestinian civil society came together to issue a call for boycott, divestment and sanctions against Israel, until it complied with the basic principles of international law. The call demanded that states, institutions, and civil society end their role in oppression. The call had a simple, morally consistent message – do not be complicit in continued violations of our rights.
As students and staff at UK universities we demand our institutions end their complicity in violations of Palestinian rights by:
– Divesting from all companies complicit in Israeli violations of international law
– Severing all links with complicit Israeli institutions
– Signing the apartheid-free pledge
Gather on Malet Street to march for divestment and justice for the Palestinian people!
—
Join this protest in London or join the day of action by flooding social media with students calling for divestment.
Create your own sign and post with the hashtags, or gather for a protest on your campus!
#DivestForPalestine #ApartheidOffCampus #EndApartheid #SupportBDS
Hosted by PSCs Youth and Student Committee
We use cookies to give you the best experience on our website. To learn more, please visit our Privacy Policy. By continuing on our website, you accept the use of cookies and our revised Privacy Policy Accept
Privacy & Cookies Policy