The Israeli government continues to press ahead with its gross violations of international law and Palestinian human rights, accelerating the ongoing colonisation of yet more Palestinian land. These include plans to proceed with formal annexation. Despite the rhetoric from some of our political leaders hat the US-UAE has taken annexation off the table, Israel has made clear that its plans are merely on temporary hold. Netanyahu, has stated clearly , speaking after the UAE deal that “There is no change to my plan to extend sovereignty, our sovereignty in Judea and Samaria, in full coordination with the United States.”
Meanwhile Israel proceeds with the de facto annexation on the ground. In October 2020 the Israeli government approved 5,400 new settlement units on stolen Palestinian land in the West Bank. In tandem, Israel has continued to demolish Palestinian homes and buildings, with 389 Palestinian structures in the West Bank razed from March to August 2020, leaving over 400 Palestinians homeless.
And Israel continues to subject Gaza to an ever-tightening land, air and sea blockade, making life insufferable for the nearly two million Palestinians, the majority of them refugees from Israel’s ethnic cleansing, trapped in the enclave. Like Palestinian refugees everywhere, they are denied the right to return to the homes from which they, their parents or grandparents were expelled.
As the TUC the reality recently affirmed, Israel’s current actions are the next “significant step in the creation of a system of apartheid” The UK government must take action by banning trade with illegal Israeli settlements and implementing sanctions, including a two-way arms embargo, until Israel complies with international law.
Public bodies also need to take action to ensure that they are not investing funds or procuring contracts with companies complicit in Israel’s human rights abuses.
This includes Universities. Our research has found that UK universities invest over £450million in companies complicit in Israel’s grave breaches of Palestinian human rights. This includes companies on the UN Human Rights Office’s list of business enterprises involved in illegal Israeli settlements, based on stolen Palestinian land.
Up and down the UK, supported by PSC’s youth and student committee, students are taking action, campaigning to get their university to divest from companies aiding human rights abuses, and they’re making an impact. At a handful of institutions they’ve successfully pressured their institutions to drop complicit investments.
Using PSCs handy database of university investments, you can find out where your institution invests and start a campaign for divestment too. On November 25th students at dozens of institutions will take action. Will you join them?
Get involved! 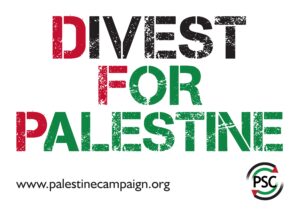 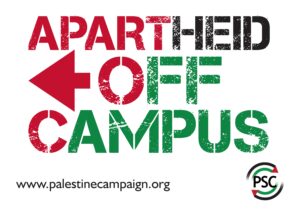