Join Kholoud al Ajarma, who belongs to one of the families ethnically cleansed from Ajjur in 1948. Today, they live in Aida Refugee Camp, Bethlehem, only about 25 miles from their village.  Her  family still have the title deeds to their land in Ajjur, now owned by the Jewish National Fund.

***Update*** We are thrilled to announce that Kholoud will be joined by philosopher and activist Moshé Machover, and veteran anti-Apartheid activist, and former member of the National Executive Committee of the African National Congress (ANC) Ronnie Kasrils.

The JNF owns 13% of the state land in Israel. It maintains these lands for the sole settlement of Jewish Citizens of Israel. These lands were obtained by forced sale and displacement. JNF projects in the Naqab continue to forcibly displace Palestinians as part of their ongoing ethnic cleansing. JNF-UK maintains strong organisational links with the JNF in Israel.

JNF-UK enjoys official charitable status, despite having organisational links with the JNF-KKL in Israel. Campaigners are supporting a renewed appeal to the Charity Commission, by a dispossessed Palestinian family, which aims to get its charity status, and subsequent financial benefits revoked. The case highlights the plight of a Palestinian refugee, ethnically cleansed from their home in 1948, who still has the deed to the land now owned by the JNF. 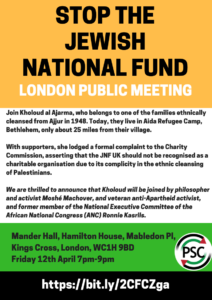