Stand Up for Palestine

For tickets, please scroll to the bottom of the page ⬇

Join us for a great stand-up show, featuring a brilliant line-up with an array of acclaimed comedians, guaranteeing another fantastic Stand Up for Palestine event.

Gavin Webster
Gavin is a stand-up comedian from Newcastle, regularly featuring on the telly (Never Mind The Buzzcocks, The Stand-up Show, Does Doug Know, Take The Mike, The Regionnaires, , The Eleven O Clock show, The Comedy Store, Comedy Blue), and Winner of Best UK Live Stand Up in 2014. Loud, sharp and sometimes controversial, Gavin is a definite Geordie with a great stage presence. His material is bold, often provocative, yet charmingly delivered. @Thegavinwebster

Isabelle Farah
Isabelle is a British Lebanese actor, comedian, writer, and general extrovert. She trained as a Serious Actor and started stand up in 2016 because it offered her a chance to talk to some strangers. As an actress she has performed in the West End and on Tour and has gigged as a stand up across the UK and internationally. Her short, Breakfast, was a finalist in the Funny Women 2020 Shorts Prize and her debut show, Ellipsis, was long listed for the Screenshot award in 2020. @irresponsabelle

Yuriko Kotani
UK-based Japanese comedian Yuriko began performing stand-up in 2014 and was named as “One To Watch” by Time Out and won the BBC New Comedy Award in 2015.Beside some TV and Radio work she made videos for the Rugby World Cup 2019, detailing her top tips for fans travelling to Japan. “A brilliantly performed, well-structured & wonderfully unique set” (fringebiscuit). @YurikoComedy

MC Susan Murray
Susan has emerged as one of the best female stand-ups in the UK and is in the top 100 Huffington Post funny women Tweeters. She wrote for and was a guest on Jeremy Hardy Talks To The Nation and has also starred in Stephen K Amos’ Idiots Guide both for Radio 4. “Her ability to make quirky connections allows her to build a compelling believable and richly funny picture of 21st century womanhood” (The Guardian). @ThatSusanMurray 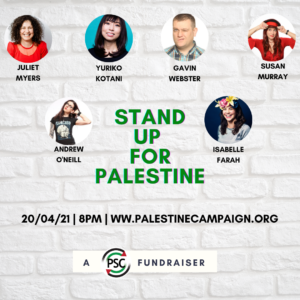 Proceeds will fund the work of the Palestine Solidarity Campaign, the fastest growing campaign for Palestinian human rights and justice.

To buy your ticket online scroll down to the bottom of this page, or to secure your place by phone please contact us on 02077006192.

Please note once you have made your purchase, you will receive a link to the YouTube live stream in the 24 hours before the event.

Further Info:
We recommend joining at 7.45pm BST to ensure you’re set-up for an 8pm start.
The runtime for this event is approximately 75 minutes.
This event is 16+ and will contain some strong language.