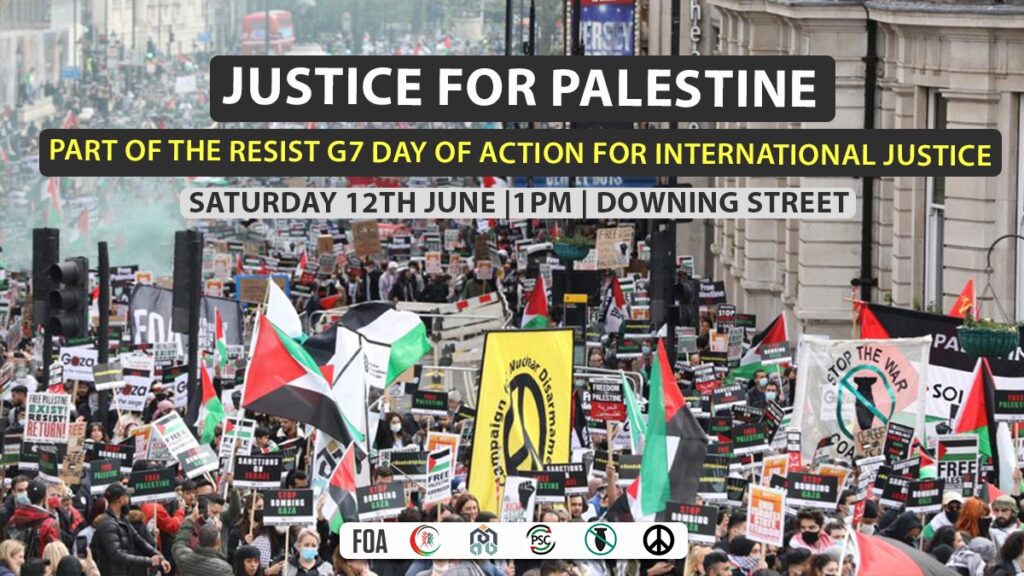 SATURDAY 12TH JUNE 2021 / 1PM / DOWNING STREET
In May 2021 Israel launched another aerial bombardment of besieged Gaza, targeting the majority refugee population in the enclave. The 11 days of relentless bombardment killed at least 248 Palestinians, and injured thousands.
While the bombs may have temporarily stopped falling, Israel’s regime of systematic discrimination against the Palestinian people, amounting to the crime of apartheid under international law, continues.
Palestinians in Gaza still live under a suffocating blockade; Palestinians in the West Bank and East Jerusalem still live under occupation; Palestinian Citizens of Israel still face a plethora of discriminatory laws and policies; while the largest group of Palestinians – those in exile – are still unable to return to the homes from which they, or their family, were forcibly expelled. Palestinians, wherever they are located, remain unable to exercise their basic right to self-determination.
Israeli apartheid can only be sustained because of the complicity of a range of governments, including those of the G7. The G7 includes the biggest suppliers of arms and military technology to the Israeli state, which are vital to enforce Israel’s regime of oppression.
During this year’s G7 summit in Cornwall, international justice campaigners will come together to organise for a world based on justice and human rights. We’re joining them by taking to the streets to demand no more complicity with Israeli apartheid.
All governments have an obligation to end their complicity and help dismantle apartheid. Instead of aiding and abetting Israel’s racist rule over the Palestinian people, the G7 must end all military-security cooperation with Israel, and employ targeted sanctions until Israel complies with international law.
Join us outside 10 Downing Street to demand no more complicity! Stop Arming Israel – Sanctions Now!
We use cookies to give you the best experience on our website. To learn more, please visit our Privacy Policy. By continuing on our website, you accept the use of cookies and our revised Privacy Policy Accept
Privacy & Cookies Policy