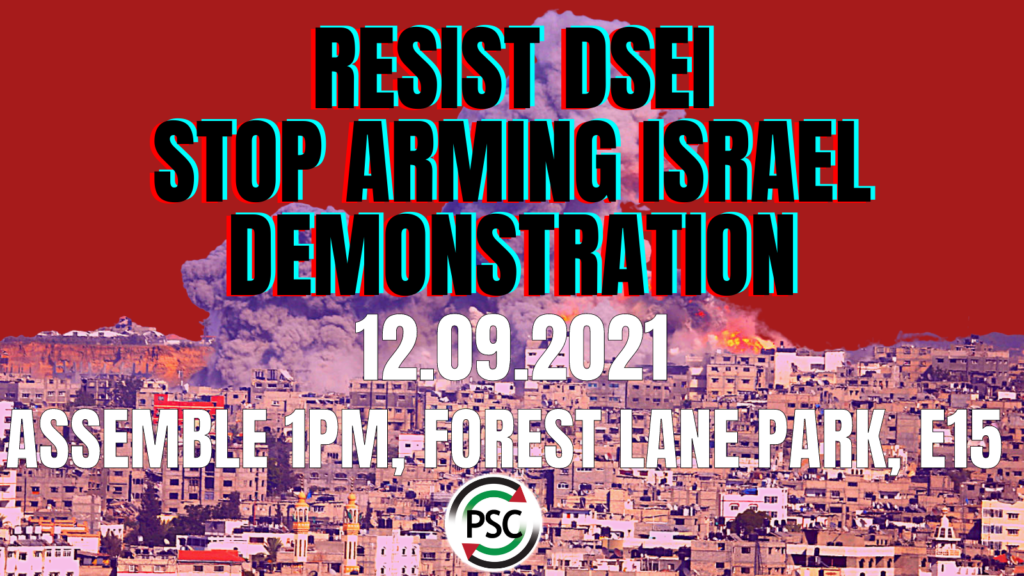 RESIST DSEI: STOP ARMING ISRAEL DEMO // ASSEMBLE 1PM // 12.09.2021 // FOREST LANE PARK, E15
In September, the world’s largest arms fair, Defence and Security Equipment International (DSEI), returns to London.
Through DSEI, London will play host to delegations from a range of human rights abusing states, who will look to buy and sell repressive military technology.
The Israeli state is a seasoned attendee of the fair. Israel operates an oppressive regime of military control over the Palestinian people in the territory it illegally occupies, as part of a system of racial discrimination over all Palestinian people. A range of scholars, legal experts and human rights organisations, including Israel’s largest NGO B’Tselem, and Human Rights Watch, have noted that this system amounts to the crime of apartheid under international law.
Part of this system includes subjecting Palestinians in besieged Gaza to regular indiscriminate bombardments, including during May this year, in which Israel bombarded the population of Gaza for 11 days, killing 270 Palestinian civilians.

Exhibitors at DSEI will include companies supplying Israel with weapons and military technology to carry out their attacks. Such as Elbit Systems, Israel’s largest weapons company. Elbit’s killer drones are used on the civilian population of Gaza. During Israel’s 2014 aerial bombardment and ground invasion of Gaza in 2014, 37% of Palestinian fatalities were killed using drone strikes, including 497 civilians and 164 children.